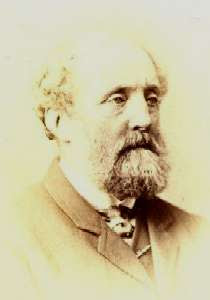 William Pearson, my pioneering great-great-grandfather, was born on September 20, 1818, on the estate of Hilton, in the parish of Kilmany, . He was the son of Captain Hugh Pearson R.N. and Helen (née Littlejohn). After Captain Pearson’s death in 1839, William migrated to Australia in September 1840 aboard the John Cooper, arriving in March 1841 at Port Adelaide.

William immediately made his way overland to the Port Phillip settlement. Thence, with a group of pioneering explorers, including Angus McMillan, William drove a herd of cattle into Gippsland, which was not yet explored by European settlers, taking the roundabout northern route by way of Albury, the Great Dividing Range, and Omeo.

After a brief period in which he investigated the viability of country around Lindenow, just west of Bairnsdale, in September 1841, William set out to “squat” on what he named a pastoral run of 14,500 acres at the confluence of the Thomson and La Trobe Rivers, stretching much of the distance between Rosedale and possession of as much land as he they could clear. He purchased the freehold at auction in 1868.

William had great success with breeding cattle, both dairy and the other sort, and duly expanded his pastoral holdings. He was almost certainly involved in the massacres of the Kurnai people (q.v.) of East Gippsland, and therefore a party to the conspiracy of silence which insured that through the 1840s Angus McMillan of Bushy Park and other Scottish accomplices got away with the genocide quite undisturbed by the colonial authorities.

In November 1864, William Pearson and three of his East Gippsland neighbors, bought from a failed prospector for £1,000 the lease of what would shortly be known as the Long Tunnel Gold Mine (below) at Walhalla in the Victorian Alps, east of . The following year they formed a company to dig and operate the mine. Pearson owned 900 (37½ per cent) of the 2,400 £5 shares, in effect an initial stake of £4,500. 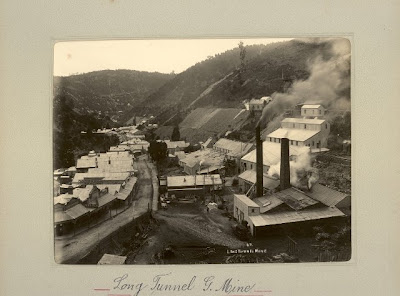 By July 1886 Pearson had earned a total of £375,000 in dividends from his investment in the Long Tunnel, an average of £18,375 per annum over twenty years. In that period, all up, over £1 million was paid to the shareholders. The scale of this wealth is easy to illustrate: In 1861 James Graham complained of having to pay his laborers 2 guineas per week “for only eight hours’ work per day.”

Unfortunately for his descendants William Pearson was very fond of thoroughbred racehorses. He was a foundation member of the Victoria Racing Club at Flemington in 1864, and was fond of betting. Heavily. He thought nothing of laying £1,000 on one of his horses. And he was extremely, consistently unlucky.

In 1884 his two entries, Commotion (who had also run in 1883, and ran again in 1886) and Plausible (who likewise ran again the following year), came second and third. In 1885 his Arsenal ran so badly that, disgusted, Pearson sold him to a Mr. Gannon, for whom the same horse went on to win the Cup twelve months later.

Worst of all, Pearson’s agent was the underbidder on a 620-guinea bay yearling called Carbine (below), a missed opportunity noted in every one of his obituaries. 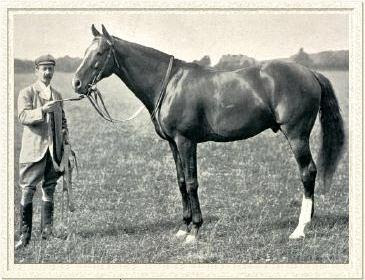 Commotion was by far the greatest thoroughbred racehorse William ever owned, “the Carbine of his day…perhaps the stoutest horse that ever ran in Australia,” who in 1884 won the Canterbury Plate, the Bagot Plate, Midsummer Handicap, the Essendon Stakes, and the Champion Stakes.

In about 1858, on his first visit back to since emigrating to , William met Eliza Laura, the daughter of Henry Thomas Travers, a retired officer of the East India Company. He was forty and she was nineteen. They got engaged, and in 1859 she followed him to , accompanied by her sister Henrietta.

During the voyage out, Eliza Travers knitted a bedspread of fine white cotton threads, which consisted of 380 patterned oblongs (arranged 20 by 19), joined together and surrounded by a ten-inch border, the whole measuring twelve by ten feet.

The young sisters stayed with a family called Peck in , East Gippsland, until August 4, 1859, when Eliza Travers and William Pearson were married at Grassdale, near . They settled in the first homestead at , and in due course had two daughters and five sons, including my great grandfather, also called William.

As a consequence of his enormous wealth, and his pastoral and mining interests, William Pearson eventually represented Gippsland in the Legislative Assembly (1864–1867) and in the Legislative Council of Victoria (1881–93), a role in which he was succeeded by his third and oldest surviving son and namesake, my great-grandfather.

The Argus newspaper noted that the elder Pearson was “not by any means a demonstrative man in politics. He was one of the class of legislators who are steadfast in their devotion to principle,” which appears to have meant that William was temperamentally incapable of anything other than total opposition to any and all pieces of colonial legislation, regardless of the issue.

Presumably as a consequence of his rising stature in Victoria, William Pearson subscribed to Burke’s Colonial Gentry, and several offprints of the lengthy, at times hilarious article on “Pearson of Kippenross” have survived.