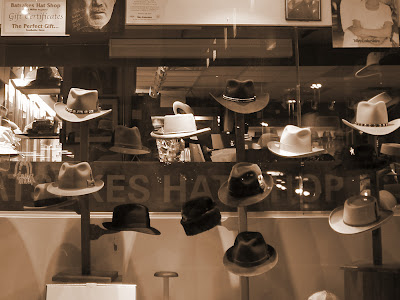 In the park outside my hotel in downtown Cincinnati, Ohio, there is a splendid statue in bronze of President James Garfield, modeled in 1885 by one Charles H. Niehaus and cast in Rome. The pose is oratorical, and forms a convenient hub for several witty panhandlers. Somebody has lodged a Panasonic logo high up inside the twentieth president’s lapel.

The Cincinnati Club is down the block, a huge post-Albertian palazzo that would have made the Gonzagas blush. For a wedding, floor to ceiling arrangements of white and pink roses and several truck-loads of lily of the valley effervesce upstairs amid chandeliers, while jungly orchids creep down the front hall banisters – this is clearly visible from the other side of the street. Obviously they have invited only the immediate country.

Around the corner is a hat shop from another era, with the elevated thrones of a separate shoe-shine department running down one side, and a fully operational hat-steamer snorting among stacks of boxes behind the wide counter opposite. I find myself being fitted for a beautiful pork-pie hat by Biltmore of Canada.

Cincinnati is one of those cities where, contra natura, heat evidently descends. It is that soupy Midwestern heat that settles comfortably in valleys, rolls out over city streets, works its way into nooks and crannies, won’t go away. I am here for the opening of an exhibition of oil sketches by Peter Paul Rubens at the Cincinnati Art Museum, to which we have lent our fine study for the ceiling of the Banqueting House in Whitehall. My main anxiety is that it could melt.

The museum sits in a lush park on top of one of the carefully-scripted ‘seven hills’ that surround downtown Cincinnati. From a nearby bluff called Mt. Adams you look over a wide loop of the Ohio River across to the southern state of Kentucky on the far bank. It is a conservative place, with a glorious commercial history. They used to call it the Queen City of the West.

Since the closely fought 2004 presidential election campaign, Washington embassies have brought parties of foreign dignitaries to Cincinnati in search of what is now known as the ‘battlefield state.’ I’m not quite sure what they find here but, like me, a significant number obviously end up at a line-dancing bar called Shooters. This is a heady islet of gaiety in an otherwise deeply unpromising downtown sea of heartily religio-neocon night-time options, including a ‘traditional Scottish pub’ which, curiously, serves deep fried curried chicken wontons.

By contrast at Shooters, with entirely disarming southern courtesy, pink locals talk Delta, Sara Lee, and the Cincinnati Symphony, among other thriving concerns. (Sara Lee herself is apparently still alive, called by some other name, stupendously rich, mean as hell, and living in the Upper East Side of Manhattan.)

Like many of America’s other small city newspapers the Cincinnati Enquirer is surprisingly good. At first I use it to distract me from the coffee, and to hide from other guests at breakfast, but soon I am hooked. There is plenty of local news, naturally, but fairly thorough national and foreign coverage also, as well as opinion pieces that, compared with many Australian columns, one finds almost Trappist in their restraint. Incidentally, the ads for horse and hog feed, to say nothing of top-drawer pedigree dogs, run to hundreds of column inches.

As a result of this morning’s read, I am lured to the Enquirer’s former headquarters, which are quite close to my hotel, a grand office building in Byzantinizing Woolworth Rococo. There are lavish carvings and tracery on the façade; mighty bronze letter boxes in the lobby; bas reliefs set into the elevator doors, and topical scenes of Cincinnati industry in mosaic on the vaulted ceiling above – a palace of civic virtue. The doorman says “Hell, it ain’t no goddam New York Times, but I’m tellin’ you we like it. You know what I’m saying?”

Later, I visit the Taft Museum of Art, which is a modest old federal clapboard mansion near the river. It was bequeathed to the people of Cincinnati in the late 1920s by Mr. and Mrs. Charles Phelps Taft. (He was the half-brother President William Howard Taft, a Yalie). Anyway, it contains, among other things, a great and rather surprising 1633 three-quarter length portrait by Rembrandt (big); an arresting portrait of Mrs. Robinson (“Perdita”) by Reynolds; a chilly trout stream masterpiece by J. M. W. Turner, and a collection of stupendously lustrous Qing monochrome vases, which I love more than is healthy.

Before the Civil War, a previous resident, the millionaire horticulturalist Nicholas Longworth, hired the African-American painter Robert S. Duncanson to paint a set of batty landscape murals in the front hall. Afterwards, I go in search of the monument to Roy Rogers, which is supposed to be by the river. When I ask for directions in one of Cincinnati’s fleet of unbelievably clapped-out taxis, the driver looks at me as if I have strayed into his bathroom. It is late in the day, and terribly hot, so I opt instead for a large, cold beer in the company of those courtly gents back at Shooters.

For a bastion of Midwestern conservatism, Cincinnati, Ohio, is jolly interesting.
Posted by Angus Trumble at 1:58 PM