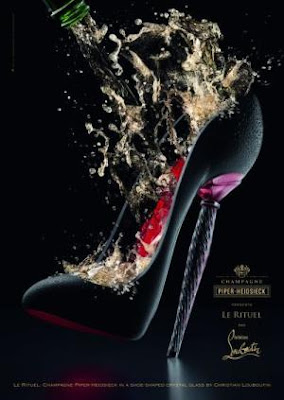 After A Brief History of the Smile and The Finger: A Handbook, lately published in New York by Farrar, Straus and Giroux, I am not inclined to tackle any more body parts. Already I receive quite enough inquiries from colleagues who are sure I will know the answer to arcane queries about hands and feet.


Most recently, a young English graduate student who is very interested in the history of dance described to me an incident in which a party of balletomanes somehow got hold of the shoe of a prima ballerina, chopped it into little pieces, stirred them into a broth, and drank it—a kind of homage. This put me in mind of that extravagant custom that seems to have flourished in the last decade of the nineteenth century and the first of the twentieth whereby raffish gents toasted some celebrated beauty with champagne drunk straight from her satin slipper. The excellent John Cooper had never heard of this practice, so I resolved to track it down for him.


The standard line appeared in a brief article signed by “The New Sub” and entitled “Where the Shoe Pinches,” in Judy: The London Serio-Comic Journal, July 21, 1906, p. 341:

In the age of gallantry, for which the present period is not remarkable, it was the custom to toast the mistress of one’s affections by drinking champage out of her white satin slipper; how many young men of the present day have a slipper amongst their valued collection of souvenirs? Not one of them; indeed, it is doubtful if they have souvenirs at all. Of course, it may have been a bit awkward for the lady, depriving her of her slipper, unless she provided herself with another pair, but those who indulge in poetical follies of this description never troubled their heads about practical matters. Nowadays we are too hopelessly dull and matter-of-fact for anything.

The New Sub seems to place this “age of gallantry” at some considerable distance from 1906, but a review by Ivor Brown of Charlot’s Revue at the Prince of Wales Theatre in London (“Bark and Bite,” The Saturday Review, September 27, 1924, p. 308) implies that drinking champagne from a lady’s slipper was not entirely un-topical, in other words an Offenbach-ish, Léhar-esque, Marlborough House baccaratty, Folies Bergère, Moulin Rouge, or at the very least Belle Epoque phenomenon, and, from the vantage point of the mid-1920s therefore, a sitting duck for the spiky wit of the brilliant young Noël Coward:

The chance thus to maul the ludicrous is supplied by the two chief librettists, Mr. Ronald Jeans and Mr. Noël Coward. These authors are usually more than flippant if less than philosophical…Mr. Coward, for instance, is at his liveliest in depicting a Parisian cabaret of 1890 with the polka as its high lavolt and a vintage English gentleman (Mr. Morris Harvey) drinking champagne from the slipper of La Flamme, a ravishing and freely proportioned charmer who sustains her ardour for the polka and English whiskerdom with much knowing application to the absinthe glass. This is nonsense de luxe. I need hardly say that Miss Maisie Gay coruscates as La Flamme, Mr. Harvey being an engaging moth to this prodigious candle.

More recent sources attribute the gesture to individuals such as H.R.H. Prince Henry of Prussia (a younger brother of the Kaiser, and rather less complicated with both arms in working order), who, when touring the United States in 1902, apparently expressed keen interest in visiting the demi-monde Everleigh Club at 2131 South Dearborn, Chicago, Ill., and was said to have drunk champagne from the slipper of one of the proprietors, the Misses Ada and Minna Lester, who lost it whilst dancing on a table. (Earlier the Lesters ran a modest but friendly bordello in Omaha, Nebr.)


However, identically the same incident was soon ascribed to H.I.H. the Grand Duke Boris of Russia, and instantly deplored by the Women’s Christian Temperance Union, who protested in the strongest possible terms by registered letter to President and Mrs. Theodore Roosevelt. The Grand Duke hotly denied ever having done such a thing on the grounds that he was a prince of the blood royal, and haughtily blamed gutter journalism. (See “That Naughty Boris,” The Camperdown Chronicle, Tuesday, November 18, 1902, p. 6, and “Boris the Badgered,” Tuesday, December 9, 1902, p. 6.) One senses the the thrum and sparkle of the Lesters’s overreaching public relations machinery—overreaching because before too long it got them raided by the police, and closed down.


Interestingly, the gesture eventually came to be associated with particular actresses such as Lillian Russell, also of Chicago—though rather satisfactorily the owner of the shoe now took the driver’s seat. According to “Beaucaire,” in her regular column “While Strolling Around Town” (Argus, Saturday, February 1, 1941, p. 14),

Back in Lillian Russell’s day, no actress possessed the real spirit of the theatre if she didn’t periodically dance on a supper table and drink champagne out of a slipper. But though I watched Elsa Stenning, the Australian actress [and soprano], who opens at His Majesty’s to-night in “The Vagabond King,” very closely at a party the other night, I didn’t notice her do either of these things. She seemed quite content to nibble nuts and ham sandwiches.

Though diminished, and transplanted to midtown Manhattan, the Lillian Russell tradition was still alive and kicking as recently as March 20, 1996, when Russell Baker remarked in the New York Times (p. 23):

After long absence from New York you notice things that full-time New Yorkers have quit seeing. Has it been widely observed, for instance, that the famously talky New York cabdriver is gone with the Trylon and Perisphere, the $1.50 second-balcony ticket for the best show on Broadway, Yankee Stadium crowds wearing fedoras and business suits, and old Delmonico’s [at Fifth Avenue and 44 Street], where men with diamond studs glittering on starched shirts may or may not have drunk champagne from Lillian Russell’s slipper?


However, by far the earliest and most intriguing clue I have yet located as to the origins of drinking champagne from a lady’s slipper is a throwaway remark tucked in the middle of a tedious and prudently unsigned review of Turquoisette, or, A Study in Blue, the first classical ballet ever conceived and produced in colonial Australia. Expensively choreographed by Rosalie Phillipini, and set to music by Léon Caron, the prolific composer of bad commemorative cantatas, Turquoisette was commissioned for Williamson and Musgrove’s Italian Grand Opera of Melbourne “as a plotless divertissement in one act.” The show augmented Leoncavallo’s I Pagliacci and Mascagni’s Cavalleria Rusticana during a brief but lively season at the Princess Theatre (Argus, Saturday, September 16, 1893, p. 10). According to the Argus’ critic:
Posted by Angus Trumble at 3:43 PM