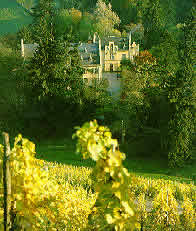 Mum and Dad took me on my first visit to during the Christmas holidays of 1975–76. I was eleven years old. The rationale of the journey was to spend time with my brother Hamish, who was then an undergraduate at , .

Hamish met us in , and the four of us traveled together by train to , , , and , where we spent the day with Mum and Dad’s old friend Dr. Andreas von Schubert, whose ancient vineyard called Maximin Grünhaus is close by, at Mertesdorf, on a steep bank of the .

Andreas von Schubert was a charming, enormous, and supremely generous man. He stayed with the Trumbles at when in November 1956 he came to to attend the Olympic Games.

Beforehand, in an effort to “modernize,” the city fathers demolished most of the enormous, creaky but serviceable colonial-era hotels that were still left standing in the center of Melbourne. They were considered a national embarrassment, and only the old Windsor survived. This frenzy of destruction created the almighty problem of how to accommodate the tens of thousands of foreign visitors who, not for the first time in her history, converged on Melbourne from all corners of the globe.

The solution was to create a billeting system, whereby carefully vetted families agreed to place at the disposal of the authorities a sufficiently comfortable spare bedroom or two in which weary travelers could be placed as paying guests.

In a no doubt hilarious sketch for a review, the undergraduate Barry Humphries lampooned the system by creating the character of Mrs. Edna Everage, whose offer to make available her lovely home in Moonee Ponds (and appurtenances in duck-egg blue, etc.) was bound to be rejected on the stuffy grounds of snobbisme, if not taste.

Fortunately Mum and Dad passed master, and in due course their enormous, friendly German house-guest took up residence, I think, in the front room. Hamish was a ten month-old baby, Simon four, and Nick was six years old.

That summer was unusually hot, even for Australia. At first, so the story goes, the family was intrigued, then fascinated, and finally maddened with curiosity as to how it was possible for Mr. Von Schubert to retire sweatily to his boiling hot, un-air-conditioned bedroom (without en suite), and presently emerge as fresh as a daisy.

Eventually, Mum could stand it no longer, and, presumably whilst Andreas was out for the day, attending the Marathon or some other Olympic event, she stole into his room, and naturally found on the dresser an enormous bottle of excellent, hi-octane eau de cologne, an accessory, a personal necessity, an item of toiletry which was still in Australia regarded as breathtakingly exotic.

Mum and Dad paid a return visit to Andreas in 1961, during which he drove them all over . That visit coincided with the sharp political tensions and the very real fear of nuclear war that arose after August 13, when the communists started putting up the wall.

Andreas changed his plans so as to steer clear of West , but the driving holiday went ahead as planned.

I think Mum and Dad were fairly happy to return to Melbourne in one piece, traveling, as was their custom, in separate aircraft (with innumerable stops), to insure that, if one went down, the other parent would hopefully survive to take care of the children.

By 1975, when I met him for the first time, Andreas von Schubert was aging, but still enormous, and firmly in charge of his family’s wine-making business at Grünhaus. In 1981 he passed the reins to one of his many children, Dr. Carl-Ferdinand von Schubert, and I confess I do not know if Andreas is still alive.

I remember being shown into the wonderful, musty barrel-vaulted stone cellar, which was underneath one of the outbuildings at Grünhaus. It was, in fact, an ancient Roman cellar. Predating the beautiful house by many centuries, the Grünhaus cellar has been in continuous use at least since the Ottonian period, and in Heidelberg earlier this year I was pleased to discover that their Bruderberg, Herrenberg, and Abtsberg vintages are all still wonderful.