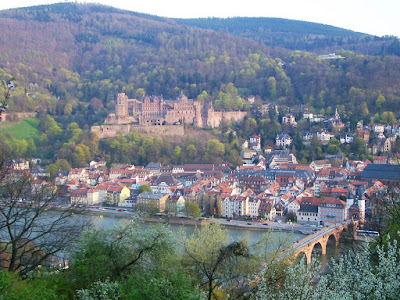 I came to Germany to give a paper about smiling habits at a symposium coinciding with the fourth Triennale of Photography in the Freie und Hansestadt Hamburg. It seemed somehow counter-intuitive to be addressing a large, very serious German audience in English, so I was correspondingly nervous. I checked by e-mail about five times before I left New Haven, just to make sure that there had not been some terrible misunderstanding. No, came the response. The audience will understand English.

About fifteen minutes into my paper, beadlets of perspiration began to migrate down the bridge of my nose. Accumulating at the tip, eventually a large, warm droplet landed on my text, plop. Thenceforth the flow was continual, and much encouraged by a gigantic pipe noisily feeding hot air into the symposium tent right under my feet.

According to our moderator, Dr. Henriette Vath-Hinz, biometric passport photographs must not reveal even the hint of a smile, but afterwards, over lunch, I was able to prove to her that our Australian authorities will evidently allow the ghost of one. When I renewed in Washington, last January, they seemed more concerned with the distance in millimeters between the top of my head and the end of my chin. However I suppose deadpan passport photographs are the way of the future.

Afterwards, in one of the quiet bars in St. Georg, I heard Tina Turner on the radio, then a creepy performance in German of “Mack the Knife,” greeted with wild applause, followed by Gounod’s Ave Maria in an updated riff by the late Charles Aznavour, and, afterwards, Madonna: “Borderline.”

The strangeness of all this was reinforced by the framed photograph of Her late and Royal Highness the Princess Mother of Thailand which was hanging behind the bar. How many customers, I wonder, have ever recognized her?

Now I am in Heidelberg, doing a repeat for my German publishers, Spektrum Akademischer Verlag, and for the supremely generous Deutsch-Amerikanisches Institut. The Institut building was the focus of student protests in 1968, but it is now in the capable hands of one of the then protesters, Dr. Jacob Kollhofer.

I built in an extra day to see the town, which is in the throes of a perfect spring. I walked in the footsteps of Hegel and Goethe on the Oberer Philosophenweg, from which the photograph was taken, through orchards frothing with cherry, apple, and pear blossom, daffodils and tulips; walnuts, chestnuts, and pollarded plane trees lining the Neckar, all shooting like mad.

Strolling in the town I heard an organ of rare splendour erupt in the Heiligegastkirche. Is there anything with a greater measure of natural dignity than the interior of a German gothic church?
Posted by Angus Trumble at 11:24 AM