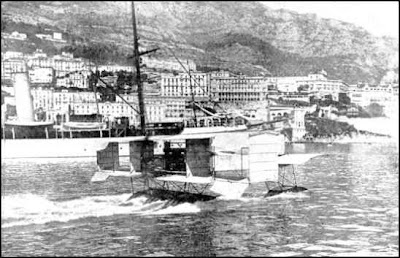 When Granny casually remarked in her brief handwritten memoir that she had flown in an aeroplane at Menton in the south of France early in 1914, well before the outbreak of World War I, I am sure it never occurred to her that this might eventually identify her as one of only a handful of adventurous young women who, at this early date, had ever flown at all.

She must have been aware of it at the time, but in the past forty years the history of aviation has come a long way, and now, of course, such early ascents have attracted the interest of many enthusiasts, historical societies, and scholars—never more so than since the centenary of the Wright Brothers’ first successful flight on December 17, 1903.

As far as I can tell, one of the only amphibious aircraft in which Granny could have flown at Menton in early 1914 was an adaptation of Gabriel Voisin’s famous, back-to-front “canard” biplane, which you see here at Monte Carlo equipped with customized floats, and, in the cockpit, Voisin’s collaborator and test pilot, the dashing Maurice Colliex. It may even have been Colliex, or one of the Voisins, who took Granny up.

In June 1972, when Concorde came to on a series of globe-trotting demonstration flights, Granny and Mum took me out of Grimwade House to go out to Tullamarine for the day to see her from the observation deck on the roof of the old international terminal. She was sleek and tiny (Concorde, not Granny), and, I recall, parked some way distant, on the Ansett side. I was eight.

We watched her for hours, until she took off for a supersonic spin out over the Tasman Sea with a party of V.I.P. passengers including the Governor, Major-General Sir Rohan Delacombe, and Charlie Curwen.

I waved almost as frenetically as I remember waving from Station Pier to the R.Y. Britannia when in 1970 she weighed anchor in Hobson’s Bay, and the Queen and Prince Philip sailed away.

I remember it was a grey, blustery day out at Tullamarine, but I think Granny was almost as excited as I was.

Of course, it was not until lately, when, with the help of my friend Larry Manley, who is an aviator as well as a distinguished Shakespeare specialist, I looked into the matter of Granny’s pioneering flight at Menton, I had never imagined the awesome significance to her of that thrilling day, sixty-two years, two World Wars, numerous droughts, a Great Depression, four children, and seven grandchildren later.

She died peacefully three years after that.