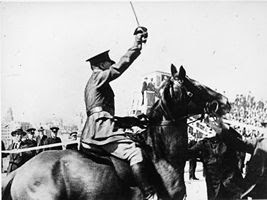 Nan (q.v.) had two brothers, the younger of whom, Uncle Attie, as he was known, fought in World War I and, in the late 1920s and early 1930s, became involved with the New Guard, the rather hopeless Australian fascist-leaning paramilitary organization centered in .

The New Guard was led by a disgruntled veteran of the 15th Hussars, the marginally successful antique dealer and upholsterer Captain Francis de Groot. Uncle Attie rose to be one of his deputies.

Both men (and others) were arrested after the intervention of Captain de Groot at the ribbon-cutting ceremony when, on March 19, 1932, the socialist premier of New South Wales, Jack Lang, opened the .

In an ostensibly harmless political gesture, De Groot upstaged the premier when, in front of a crowd of tens of thousands, he advanced on horseback, drew and brandished his saber, and used it to slash the ribbon, loudly declaring the bridge open “in the name of the decent and respectable people of .”

I am not sure that we can be comforted in any way by that form of words, because, of course, Nazi Germany demonstrated just how effective a shield the concepts of decency, even respectability, yield to a well-organized gang of vicious murderers.

In any case, some years ago, on a visit with my mother, my eldest brother Nick, and his younger son, my dear nephew Ned Trumble, to see the excellent historical display housed in the south pier of the bridge, whilst watching a public presentation of a documentary film about this infamous event in the nation’s interwar history; apparently disregarding the admirable tone of disapprobation with which the film was imbued, in the part where they showed the footage, accompanied by sinister, martial, rat-tat-tat sound effects, in which these notorious, Nazi-ish uniform-wearing Australian would-be fascists were hustled into the Sydney Magistrates’ Court (to be charged, first, with lunacy, and, when that charge was dismissed, with malicious damage to the ceremonial ribbon), Mum immediately recognized the compact, blond, Nan-shaped figure at Captain De Groot’s elbow, leaned across, and, unperturbed by the presence of a good number of other, somewhat startled members of the audience, piped up cheerfully:

Posted by Angus Trumble at 9:03 AM