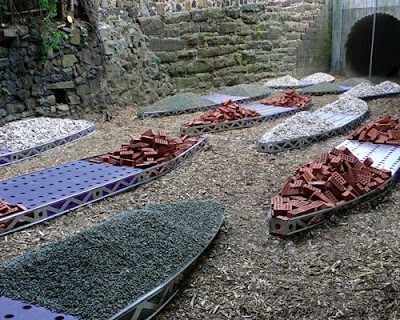 What is this work of art? Is it a very large sculpture, a piece of landscape architecture, or civic design? Is it an event, a memory, a 3-dimensional visual poem, or simply a place?

In the short-hand jargon of the current contemporary art world, the work of Slovenian artist, Matej Andraž Vogrinčič is usually called ‘site specific’ or ‘installation’ art. This has developed out of a remarkable transformation in the range and type of locations that artists sought out in the past 50 years. American ‘earthworks’ or ‘land art’ of the 1960s, for example, is one of the most striking of those recent movements. In common with many other kinds of large-scale ‘installation’, these projects, which were sometimes even created for places where few if any people might actually see them, defied the conventions of the modern art market that have arisen over the past 300 years. It is often impossible to ‘own’ an installation, to collect it, or to corral it into a larger collection of art by other people. It insists upon its own autonomy, and frequently takes advantage of unique features of the surroundings, whether it is a stretch of open country or a disused urban space. And the artist asserts his right to shape and determine every aspect of our experience of the work of art. It can never exist in quite the same way anywhere else, or at any other time, except in our memories.

Matej Andraž Vogrinčič has created installations in Ljubljana, the capital City of his native country, Slovenia, as well as in Venice, Italy; Adelaide, South Australia; the isolated opal-mining community of Coober Pedy in the desert of far outback Central Australia; Perth, Western Australia; Christchurch, New Zealand, Liverpool in the north of England, and elsewhere. This installation in New Haven is his first work in the United States.

In each case, Matej Andraz takes advantage of the unique environment in which he works, often alluding to the history of the place, bringing to the task not merely hard physical work, but wry wit, and a no-nonsense, non-argumentative accommodation of the concerns of local people, the requirements of the civic authorities, even the weather. One of the most important features of his work is its capacity to interest and stimulate children, and while his works range widely in format, they have in common a basic clarity in the choice of simple motifs with local resonance, and a capacity to harness those motifs with intelligence, and gentle humor.

This text was drafted for public information by a private group of individuals in New Haven, who made possible Matej’s recent, 2007 Farmington Canal ‘Erector Set’ project, part of which is illustrated above. The text, which was aimed at the general public, was used by the group in various ways along with an interview I videotaped with Matej.