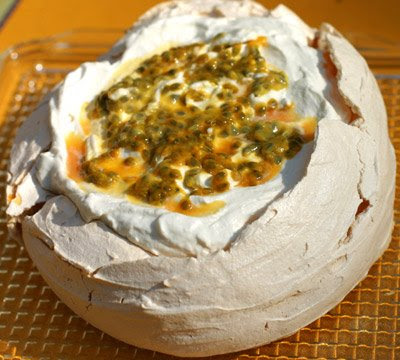 It is a painful truth, but one which must be faced up to, that the pavlova, that iconic Australian dessert, a staple since the 1930s, was actually invented in New Zealand.

The pavlova was named in honor of the great Russian ballerina Anna Matveyevna Pavlova (1885–1931), who toured Australia and New Zealand for J. C. Williamson in 1926 (March to August), when Robert Helpmann (aged seventeen) was among the local cast of supernumeraries. 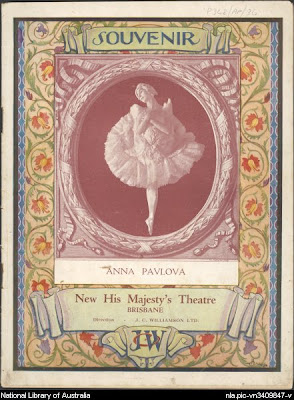 Not surprisingly, Pavlova’s visit to was described as “the chief event of 1926,” and according to the ballerina’s biographer, Keith Money, the pavlova was devised by the head chef at a hotel in .

Anna Pavlova made a return visit to on her last world tour in 1929 (March to July), but on that occasion she did not go back to .

However, this Davis recipe is not for a meringue-based dessert, the canonical pavlova, but for a type of jelly—consisting of a cup and a half of hot water, a cup of orange juice, half a cup of milk, three dessert spoons of Davis gelatine, six of sugar, and different sorts of artificial coloring, combined and set in a mould. This same recipe, a red herring as it were, persisted in subsequent Davis Dainty Dishes up to 1937.

However, the second (1927) edition of Terrace Tested Recipes, a collection published by the ladies of Terrace Congregational Church in Wellington, contains an ingenious submission by Mrs. McRae for “meringue cake” that is nearly identical to the classical pavlova, but makes no reference whatsoever to the eponymous ballerina.

Several other New Zealand cookery books from 1926–29 describe similar pavlova-style meringue cakes, while successive editions of Futter’s reckless Home Cookery For New Zealand (1926 and 1929) contain a recipe for “meringue with fruit filling,” which likewise makes no mention of the danseuse.

It was not until the publication of the first edition of Practical Home Cookery: Chats and Recipes, selected by the mysterious “Katrine” (1929), that meringue cake and the name “Pavlova” finally converge. The presence of chopped walnuts worries me, though, suggesting as it does a degree of unbridled experimentation. Larousse Gastronomique gives 1929 as the year of the orthodox pavlova, and they may well be right.

Great confusion has arisen from the 1973 testimony of Mr. Herbert (Bert) Sachse, sometime chef at the Hotel Esplanade in (proprietor: Mrs. Paxton). Mr. Sachse claimed to have invented the pavlova as an afternoon tea delicacy in 1935, an affectionate memento of Anna Pavlova’s 1929 visit to the hotel. He also claimed the recipe he followed was clipped from the Ladies’ Mirror: The Home Journal of New Zealand (April 2, 1935), so one presumes that his working definition of the word “invent” was fairly broad.

Unfortunately none of this helps us, although the weight of evidence suggests that the dish itself was invented in well before Pavlova’s arrival, and named for her there no later than 1929. The article about Anna Pavlova by Jane Pritchard in the Oxford Dictionary of National Biography is unequivocal: The pavlova was both created and named in

Evidently it was co-opted by outrageous Australian housewives during the Great Depression, without adequately acknowledging this, ’s premier cultural export.