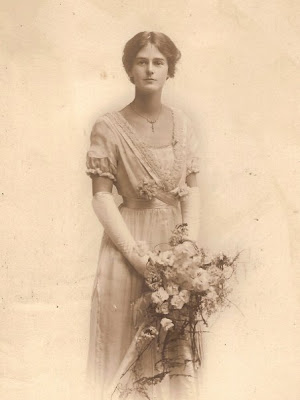 Granny was born on November 27, 1893, at Bonegilla Park, Wodonga, and grew up with her brother Roy, her sister Emily (Aunt Mim), and their younger cousin Mollie (Mungie) at Kilmany Park, near Sale in East Gippsland.

She was the head girl at The Hermitage in Geelong in about 1911–12.

Bafflingly, the family spent the years of the First World War living in Europe. At first they were stranded. When war broke out the family was touring Wales in a motor, and had great difficulty finding anyone who could speak English. Uncle Roy immediately joined the British Army, and served in the 13th Hussars in France and Mesopotamia. Although the Pearsons sailed back to Australia at the end of 1914, after a few months they turned around and came straight back again, presumably at some risk of enemy attack, to be nearer Roy, and possibly to resume a style of life in England that clearly suited their daughters. They settled in a large house called The Orchard on Chorleywood Common near Rickmansworth, on the northeast edge of London.

At the Hermitage, Granny recalled seeing her first aeroplane, a black speck that appeared over the You Yangs, but in early 1914, on a visit to Menton in the south of France, she actually flew in one.

William Pearson died prematurely in 1919, and Kilmany Park was sold not long afterwards. The station was subdivided, and the house was turned into a glum Presbyterian Boys’ Home.

In 1918, Aunt Mim, who was by then the widow of a British army officer, Pat Jackson, contracted Spanish influenza. Granny caught it too. They were both lucky to survive, as were their parents. The family returned to Australia at the end of 1918.

Soon after the end of the war, Helen married my grandfather, William Arthur Borthwick, a grazier, at Sale on October 27, 1920. Before the war she had known his older brothers, Lex and Keith, who was killed in the first wave at the Battle of the Nek at Gallipoli.

The Borthwicks were neighbors. Their property, which was creatively named Bald Hills, shared a boundary with part of Kilmany, and the Pearson and Borthwick children grew up together. Reading between the very discreet lines of Granny’s handwritten memoir – the name of Keith Borthwick crops up from time to time in connection with dances in Sale and Melbourne, golfing tournaments at Kilmany and Traralgon – one wonders whether there was more than a hint of affection between Granny and him. Keith Borthwick survives in one of the most haunting footnotes to Bean’s official history, but fell in perhaps the most disgracefully futile action at Gallipoli.

The family moved to Geelong in 1936, and eventually settled first in a large house called Raith in Newtown, then at 188, Noble Street, where they remained throughout the final years of World War II.

As a child my grandfather had contracted rheumatic fever, which permanently weakened his heart, so although he volunteered for active service in World War I, unlike his two brothers, he was not allowed to go. In the late 1940s, Granny and Grandad moved from Geelong to Berwick, where he died far too young of a heart attack in 1953 – obviously I never knew him.

Granny retired to a big, rambling Edwardian house with a pretty garden at 5, Myamyn Street in Armadale. She died at Lynn Private Hospital in Melbourne on February 12, 1975, after a brief diabetic illness.
Posted by Angus Trumble at 4:41 PM