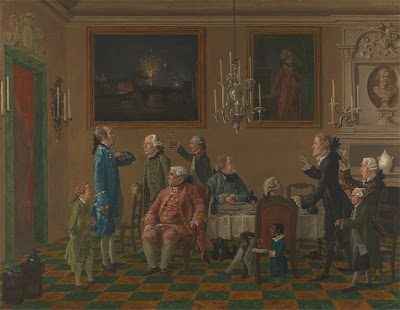 Lately an excellent colleague of mine, an enormously learned young man, has directed my attention to Mrs. Piozzi [Hester, previously Mrs. Thrale], specifically to her diary entry for March 29, 1794 (ii. 874f.), in which she coined the term “finger-twirler,” not one that I had previously come across. “[Ann,] Mrs. [Bertie] Greatheed & I call those Fellows Finger-twirlers,” wrote Mrs. Piozzi, “meaning a decent word for Sodomites: Old Sir Horace Mann [first baronet] & Mr. [George] James the Painter had such an odd way of twirling their Fingers in Discourse;―& I see Suetonius tells the same thing of one of the Roman Emperors ‘nec sine molli quadam digitorum gesticulatione.’ [Life of Tiberius, 68].” Finger-twirler does not yet appear in the O.E.D. among the many compounds listed in the article on finger, n., so at first I wondered if the nearest viable approximation was the citation for finger-work—“(a) work executed with the fingers; (b) the play of, or manipulation by, the fingers”—viz., 1849 D. Rock, Church of Our Fathers, III. x. 354: “A rich pall of silk, the finger-work of some queen,” but I am sure this is far too literal a reading. No doubt Mrs. Piozzi knew what she was doing, but I do wonder about the leap from digitorum gesticulatione to twirl. In any event, it seems that she was consistently preoccupied by matters of sexual orientation, perhaps to the point of obsession, though Mrs. Piozzi was certainly right about Sir Horace Mann and Mr. James, and I am sure she would have extended the same compliment to their friends Thomas Patch and Lord Tylney, who were also, by all accounts, fully paid-up, card-carrying finger-twirlers.
Posted by Angus Trumble at 11:31 AM No comments: 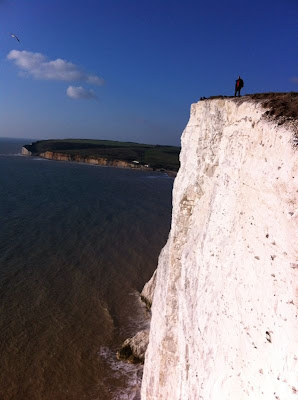 The following day we approached the chalk cliffs between Seaford and Beachy Head. The most extraordinary aspect of this stretch of south coast is that cuddly old rural England just rolls picturesquely along, up hill and down, peacefully navigating soft rises and little gullies, until.... Straight down into the sea, a sheer and entirely unimpeded drop. It’s eroding steadily, of course, which means that sometimes important listed farmhouses of inconceivable antiquity that just happen to find themselves closest to the precipice—even a quarter of a mile or so from it, are absolutely uninsurable, so I imagine whoever is the unhappy person most recently left holding the deed has no choice but to abandon ship, and leave the place to its eventual fate. Contented livestock, meanwhile, graze contentedly in the teeth of southerly gales, almost perversely ignoring the dizzy spectacle of dwelling at the abrupt margin of England. If Dungeness is the sine qua non of horizontality, the Seven Sisters, here, are the epitome of vertical. During the First World War, incidentally, depending on the direction of the wind, the incessant bombardment of trench warfare in northern France was clearly audible in the locality.
Posted by Angus Trumble at 12:05 PM 1 comment: 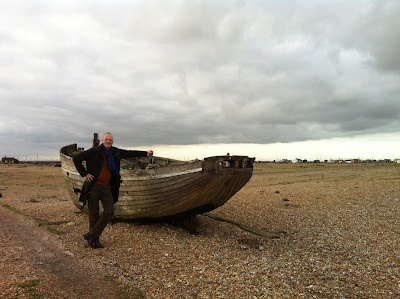 Last weekend we stayed in a little cottage on the South Downs, hard by the ancient smuggling village of Alfriston, East Sussex. Two places, barely fifty miles apart, attest to the extraordinary variety of the English landscape. Dungeness (above), where we went on Saturday, is a flat promontory composed entirely of shingle, one of the largest such aggregations in existence. Here all things are in a state of gradual reclamation: metal, driftwood, stone. The elemental powers simply grind them all to dust. Though barely twenty-seven miles away, just across the horizon, France might as well not exist; the place screams isolation and insularity, notwithstanding the twinkling lights of the nuclear power station that squats with a measure of contingency on the western edge. Fishing boats perch atop the vertiginous beach of loose, salt-encrusted stones, waiting stoically for their working life to expire; cottages cling to the ground as best they can. Dungeness makes David Copperfield’s Yarmouth feel positively cosy; it could easily be the farthest extremity of the world.
Posted by Angus Trumble at 12:02 PM 1 comment: 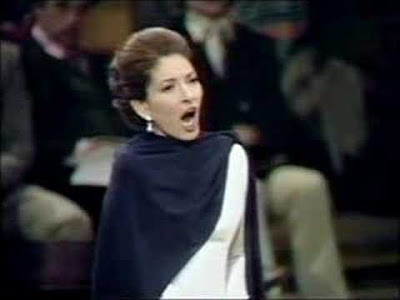 Among the assortment of old gramophone records that lived in Dad’s study at number 18 Denham Place was “Callas à Paris,” a collection of French operatic arias sung by Maria Callas, and conducted by the youthful Georges Prêtre. Thank God I listened to that record a lot as a teenager, but it took me a long time to discover the early recordings made by Callas when she was at the height of her vocal powers, and in every respect in her prime. Among those the one I now listen to most is the 1953 Teatro alla Scala recording of Pietro Mascagni’s Cavalleria Rusticana, conducted by Maestro Tullio Serafin. For what operatic confrontation is as painful or affecting as the scene in which Santuzza begs her lover (sung by Giuseppe di Stefano): “No, no, Turiddu, rimani rimani ancora” (“Turiddu, Stay with me, stay”)? And what fury when, at length, high-handedly he doesn’t, was ever better expressed in music than by Maria Callas here? No doubt Christoph Willibald von Gluck was a more soothing presence in the front room at Denham Place than Mascagni, whom I think probably Dad would have disliked, but there can be no doubt that Mascagni was the better fit for Callas. At the end of her career, when her voice was in shreds, Callas performed the same duet in concert with Giuseppe di Stefano in the Royal Festival Hall in London—the sparks flew there, too, but the pain of the drama itself was overshadowed by the greater anguish of a once matchless star who must have been aware that her own voice had abandoned her. You can see it in her eyes.
Posted by Angus Trumble at 2:55 PM No comments: 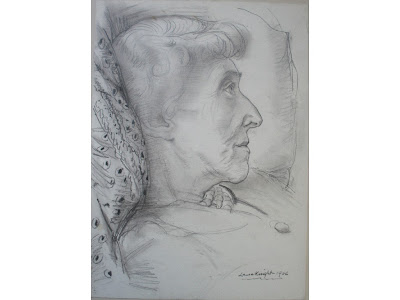 This rather beautiful drawing by Dame Laura Knight is coming up for sale late this month at Lawrences in Dorset, for next to no money. It shows Princess Marie Louise as a rather wistful old lady, having just completed her very engaging volume of memoirs, My Memories of Six Reigns. The lot contains two further drawings by Knight, showing the hands of the sitter and sheets of writing (“To all those whose friendship and affection have made my long life so full of interest and happiness―Marie Louise; I have told you that my religion and faith have been the anchor to which I have clung all through my life with its many joys and sorrows. There is no other anchor, and with that assurance I say ‘Farewell’―Marie Louise.” The drawings and manuscript were apparently acquired by the vendor’s mother from Princess Marie Louise’s last Lady-in-Waiting. According to the catalogue notes, the Princess died at her home off Berkeley Square on December 8, 1956, aged 84, only a matter of months after Dame Laura executed this portrait. The ones of her hands formed the frontispiece and endpapers of the Princess’s book, which was published earlier in the same year, so the group carries more than a hint of valedictory repose, or, as Lawrences rightly put it, “an unusual farewell to the nation” by one of Queen Victoria’s last surviving granddaughters.
Posted by Angus Trumble at 4:23 PM No comments: 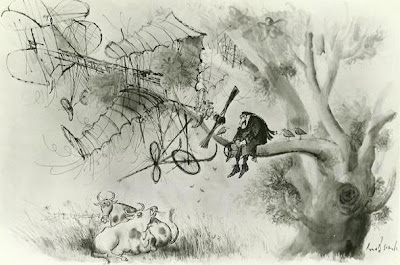 Ronald Searle has died at the great age of 91. By all accounts he felt oppressed by his enduring association with the Belles of St. Trinian’s, with Molesworth, and with all the other broadly revealing postwar English stereotypes which decades ago he skewered so exactly with his pen. His reportage and more serious later work he felt were consistently underappreciated at home; he settled in France. Yet those early, writhing symphonies of line were the works with which I grew up, and in early childhood obviously did my very best to imitate. This was my father’s taste, though interestingly in his own graphic work Dad leaned farther towards Daumier’s gens de justice. Anyway, a mere cartoonist or illustrator Searle was most definitely not, but rather, as his obituary in the Daily Telegraph rightly states, “one of the world’s greatest satirical artists.” Indeed, Ronald Searle belonged in the same category of genius as that of Saul Steinberg or Hilary Knight. His personal collection now goes to the Wilhelm Busch Museum (Deutsches Museum für Karikatur und Zeichenkunst) in Hanover.
Posted by Angus Trumble at 10:54 AM 1 comment: 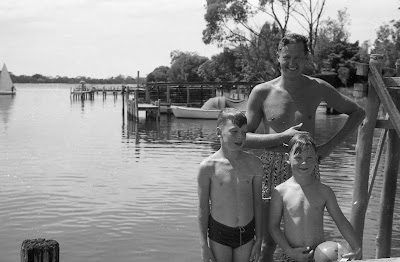 New Year’s Day? It’s incredible. The accelerating rate at which it arrives! I suppose the reason for that is that each passing year forms an incrementally smaller proportion of one’s entire lifespan, and no doubt that must make it feel as if they fly past faster. I’m not quite sure why New Year’s Day always puts me in mind of the Radetzky March and An der schönen blauen Donau because when I was growing up in Australia invariably we spent it at Metung, messing around on the shores of Bancroft Bay and Lake King, often in sweltering midsummer heat. In his heyday, Dad would join the sail-past in the old Jubilee, and we would give three hearty cheers to the commodore of the Metung Yacht Club—which event is just about as far from the New Year’s Concert in the Wiener Musikverein as it is possible to stray, yet now I am pottering around the house thinking of both: Metung and the Strausses (Elder and Younger), which evidently produce more than the hint of a spring in my step. And somehow this New Year’s Day, I have more of one—being filled with hope and energy and excitement about what this particular year will bring. I wish you, dear readers, as much of the same as anyone can reasonably expect, all the luck in the world, and I send you, wherever you may be, and for what they are worth, my warm greetings for a happy and prosperous 2012.
Posted by Angus Trumble at 2:31 PM No comments: