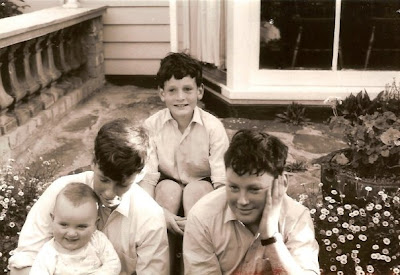 My only regret about living abroad is that I do not see nearly enough of my family. Here we are in 1965, surrounded by daisies near the dining room window at number . Nick is holding me, Simon is on the right, and Hamish is sitting on the top step.

The old house was demolished, and the pretty garden obliterated, in 1979, after their old friend Joe Palliser designed and built a new house for Mum and Dad on the site next door. In a way, that move was a tangible expression of changing circumstances, because by then all three of my brothers had left home, and I was still at school.

I have many happy memories of the old house, including what must be my earliest: the sight through the wooden rails surrounding my cot of afternoon sunlight falling against the back of a pair of closed curtains in the front room. That room was for the time being, I think, an ad hoc nursery, and not Dad’s study where he liked to play old records, and potter around long after everyone else was asleep, which is how I remember it much later.

Those curtains were decorated with leaping black horses, and maybe a few small Chinese characters also, widely spaced against a buff-colored background, and I once had the startling experience of seeing an eerily similar design at the Metropolitan Museum of Art in New York, to which clearly most if not all aesthetic roads eventually lead.

Mum is there, too. I think she must have come in to open the curtains, and get me up from my nap, but what stands out is that bright shaft of southern light slanting over the back of the curtains, and the leaping horses.

There was a curvacious verandah at the front of the house, with a glorious wisteria trained along it, and a creamy pink cammellia adjacent. I also remember hearing the clip-clop of real horses, the draught horses from Woodmason’s Dairy.

It seems somehow incredible that, in the late 1960s, the milk bottles were still delivered to us each morning by horse and cart, even though the cart was equipped with sensible rubber tyres, ingeniously cannibalized from some old motor vehicle.

They came up from the direction of , and whether or not the gentle incline provided some gastro-intestinal stimulus, almost always the pair of horses left behind plenteous lumps of sweet-smelling fibrous manure right opposite the front gate, which Mum collected with a spade and put on the garden.

Sometimes Mum used to take me for a walk down to Woodmason’s Dairy near the corner of Glenferrie and Malvern Roads, to pay a visit to the horses in their stalls.

Mum has never permitted herself many luxuries, but one thing she loves perhaps above all else, and has done since she was a little girl living at Raeshaw, the family property near Sale in East Gippsland, is pure cream.

More often than not there was still a suggestion of real cream that formed at the top of Woodmason’s bottles of milk, and on the cap, which was made from aluminium foil. To open the bottle, carefully you depressed the cap with your thumb, and peeled it back.

As a little boy I adored watching Mum sometimes lick the little dollop of cream off the inside of the cap of a milk bottle, wearing an expression of unalloyed pleasure, to which she added a little staccato shrug—as if to acknowledge some vague sense of self-indulgence, even naughtiness.

The rightness and simplicity of our upbringing makes me now want to shower Mum with lavish gifts of cream, but her wholly uncomplicated enjoyment of what is now often cast as a substance almost as unwholesome as tobacco is dangerous—even while, as Nick rightly points out, coffee now comes in “tall,” “grande,” “venti,” etc., where once it came in a “cup”—is, I think, firmly grounded in sparing consumption.

Posted by Angus Trumble at 3:46 AM