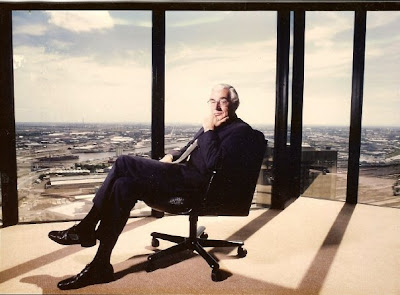 When, in accordance with the partnership agreement he cheerfully signed in 1966, Dad retired from Mallesons shortly before his sixty-fifth birthday (January 31, 1986), he was invited to write a series of light articles for the Journal of the Law Institute of Victoria on, as he put it, “the psychological disturbances occasioned by my recent retirement as a practising solicitor, and the assumption of my role as consultant to thirty-one inexerienced practitioners who now face an uncertain future with deep apprehension.”

This is one of the photographs that were shot by Nick’s old friend Bop Colvin to accompany those whimsical and self-deprecating articles.

The idea was that, now he had retired, Dad’s office in the Rialto Building at 525 Collins Street, Melbourne, would appear forlornly vacant. (The Rialto was designed by Gerard de Preu and Partners, in association with Perrott Lyon Mathieson, and built between 1982 and 1986 by an organisation that rejoices in the name of Grocon.)

However, a rather more mogul-like effect was attained by accident, and the editor wisely decided on a friendlier, less intimidating shot.

In the end, I think Dad quite liked this one, and, in fact, he had not yet moved in. For many years Dad’s Mallesons office was on the second floor of the more discreet St. James Building at 121 William Street, adjacent to the A.M.P. Tower.

This commanding view from the 27th floor gives the impression of a vast, Texas-like hinterland, rich in mineral resources, commercial promise, and potentially intricate legal matters upon which Dad might reasonably expect to be consulted.

In fact it is the glum, yet-to-be-transformed docklands of West Melbourne and Footscray.
Posted by Angus Trumble at 4:51 PM