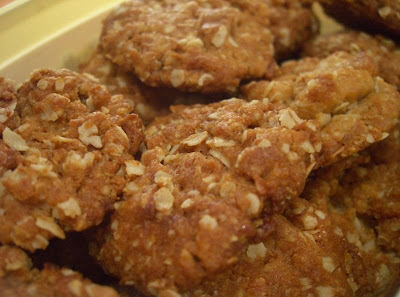 Pre-heat the oven to 300 degrees Fahrenheit, and lightly grease a baking sheet. Mix in a bowl the following dry ingredients: 1 cup of rolled oats; 1 cup of plain flour, ½ cup of sugar, ¾ cup of dessicated coconut, and a pinch of salt. Melt in a saucepan 1½ sticks of butter and 2 generous, dripping tablespoons of golden syrup. Mix 1 tablespoon of boiling water, ½ teaspoon of baking soda, then add 1 or 2 teaspoons of vanilla essence. Add this to the melted butter and golden syrup concoction. Pour into the dry ingredients, and mix well. (If it looks too sloppy, add a little extra flour or some more oats.) Spoon onto the baking sheet, then bake for about 20 minutes. Allow to cool. Prepare a pot of tea, then devour.

The acronym ANZAC was first coined by Lieutenant-General Sir William Birdwood as a telegraphic code for the Australia and New Zealand Army Corps in 1915, when colonial troops were dispatched to Egypt and Palestine, and later deployed in Winston Churchill’s ill-conceived Dardanelles campaign. The wrong spot on the Gallipoli Peninsula where the Anzac contingent landed, and met with fierce resistance from the Turks, was (and still is) called Anzac Cove (Anzak Koyu in Turkish).
Before 1928, when Atatürk shifted the Turkish language from the Arabic over to the Roman alphabet, the transliteration of Ottoman place names was a wobbly business. However, the French, who were licensed by the authorities in Constantinople to issue stamps and handle mail in various parts of the Ottoman Empire, had a post office at Gallipoli (Gelibolu), the town overlooking the Dardanelles on the peninsula that is also called Gallipoli, that is to say Gelibolu Yarimadasi.

Derived from the Greek Kallipolis, “Gallípoli” was not a corruption of Gelibolu, but was instead the modern name of the ancient Greek port near Lecce in Puglia on the western side of the heel of Italy.

The Italian spelling of the Greek name provided a rational model for the French post office in Turkey, British cartographers and, later, the Imperial expeditionary force of 75,000 men under the command of General Sir Ian Hamilton, all of whom were to become thoroughly acquainted with Anzac Cove after the landings of April 25, 1915, the anniversary of which is still commemorated in Australia, New Zealand, and the United Kingdom as “Anzac Day.”

The origins of Anzac biscuits are unknown, and the earliest combination recorded in the excellent Australian National Dictionary comes in Australian Home Cookery (1943). It seems unlikely that they were ever prepared in the trenches, as the old story has it.