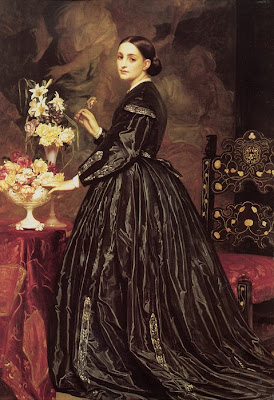 Ellinor Guthrie (1838–1911) was one of the eleven children of Admiral Sir James Stirling, the first governor of the Swan River Colony (Western Australia), and was actually born in Perth. Her maternal grandfather was a member of the so-called Reform Parliament of 1832. Ellinor Stirling married the wealthy Scottish merchant banker James Alexander Guthrie in 1856. In London the Guthries lived in some style in Robert Adam’s magnificent Portland Place, adjacent to Regent’s Park, and between 1857 and 1868 produced nine children. Sittings for this portrait took place in October 1864, after Mrs. Guthrie had recovered from the birth of her fifth daughter. The flowers, vases, embroidered tablecloth, ornate chair, and large history painting in the background, which were probably furnishings in the artist’s studio in St. John’s Wood, suggest a refined world of beauty, art, and culture.
Posted by Angus Trumble at 3:36 PM