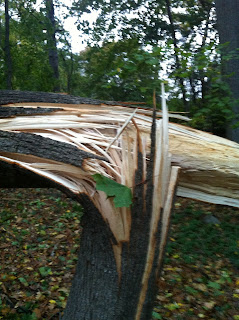 The first point is that in my neighborhood of New Haven we were astonishingly lucky. It could have been so much worse; the difference between us and what we are now seeing in lower Manhattan, the borough of Queens and New Jersey may be attributed to the random distance of sixty insignificant miles, and the storm was more than 1,000 miles in diameter. Pure luck. The second point is one that persons who have lived through a cyclone or hurricane often make, but which is incomprehensible if you have not experienced it at first hand: The sound. It is not a roar, even above the sickening cracks of big trees snapping in half like toothpicks, one by one, all around you, so much as a mighty and, to me, terrifying howl, with industrial base-notes of steam train, and at very close proximity. Mercifully this lasted only for a comparatively brief period from approximately 5.30 p.m. on Monday evening (when, of course, we lost power) until about 10.30 p.m., at which point the whole thing stopped, and there were even glimpses of a cold full moon. It did go on, of course, for much of the night, but intermittently. In the late afternoon, before the theatrics set in, the sky turned a deep pea green; I have only once seen anything like it, and that was when Mark Aronson and I narrowly dodged a tornado that mowed across Springfield, Mass., last year or the year before—I forget. At about 2 o’clock on Monday afternoon the clouds stopped scudding, and started sprinting most unnaturally. I gathered up a few precious things, and pathetically stowed them in the linen cupboard, as if this would have made the slightest difference had the roof come off. Still, it was as well to be kept busy. After dark I repaired to the basement with my duvet, pillow, flashlight, bottled water, and what remained of my supply of Fortnums fudge. I sat there feeling scared and stupid, mainly scared. You cannot sleep in case something serious strikes the house, or floods the basement, or the neighbors strike similar problems, and, of course, with cell phone coverage swept away, you are totally in the dark not only literally but figuratively also. At the head of my shopping list this week is an old-fashioned transistor radio, or, better still, a hand-cranked clockwork one for real emergencies. That, and a generator. I am not quite sure why one clings to total irrationality in situations such as this, but for some reason the fact that the power is still off—and the fridge full of slowly rotting food—bothers me far more than it would otherwise because I make out my monthly check to a relatively small but profitable corporation that persists in calling itself, in the face of overwhelming evidence to the contrary, The United Illuminating Company.

Posted by Angus Trumble at 11:49 AM No comments: 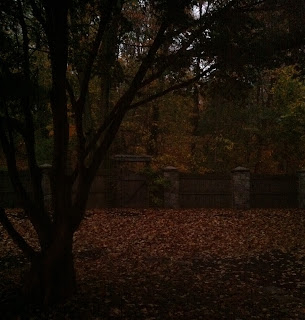