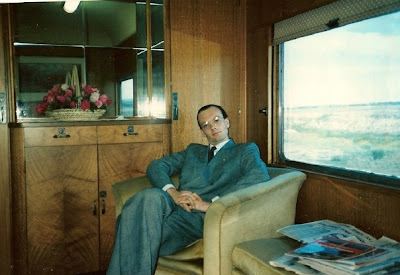 Country tours were a lot of fun. At that time, around 1988, the Governor of Victoria had at his disposal two vice-regal carriages which could be hitched to any regular train, and shunted into a convenient siding wherever we needed to stay at our destination in country Victoria.

Here I am, smug as can be, an insufferable youth, making myself at home in the saloon.

The train gave the Governor the advantage of not needing to make invidious choices of hotel or motel accommodation in local communities where one business or another might end up feeling slighted. No doubt such scruples strike many today as entirely irrelevant, but they were not then.

In some respects the journey to Mildura, Dimboola, Hamilton, Alexandra, Sale, or Ouyen, was only as long as the drive from Government House to Spencer Street.

Both crown cars would drive us onto the platform, the vice-regal standard fluttering cheerfully on the bonnet, and – to the stupefaction of ordinary commuters with bikes, bags, and parcels – we simply boarded the train. Whereupon we unpacked, settled into the saloon, consulted our briefing documents, opened the newspaper – that was when people still read daily newspapers – and trundled with the rest of the train out of Spencer Street.

Meanwhile, as soon as we departed, Patrick Famularo and Jimmy Hermence, the drivers, would drive the crown cars on to the final destination, ready to hook up with us later in the day or early the next morning, to commence the country visit programme.

The vice-regal carriage proper consisted of two large adjoining cabins for the Governor and Mrs. McCaughey, each with an en suite bathroom, two small cabins with compact facilities for staff (us), and a comfortable saloon which doubled as a sitting and dining-room, as well as a small galley in which the gritty V-Line cook wove a mysterious, if at times slightly ponderous, culinary web.

As time passed, I started keeping certain clothes and other things in “my room” on the train, because we used it so frequently. It was perfect.

The carriage was actually built prior to a projected state visit to Australia in 1948 by King George VI and Queen Elizabeth (the Queen Mother) which never eventuated because of the King’s declining health, and was for many years used occasionally by The Queen, and in-between times by successive governors of Victoria.

By the 1980s, the railway authorities were occasionally leasing it to rock bands for their tours of country Victoria, with unfortunate consequences. It was wonderful – all fittings intact, down to the cabinetry, china, cutlery, even the Victoria Railways linen, and customized Royal Doulton potties. It was retired some time in the 1990s, though hopefully not demolished.

The second car was much older, and a relic of a far less glamorous by-gone era, not at all comfortable, in fact at top speed one had the impression that it might easily disintegrate.

On one occasion I remember being invited to ride with the driver between Stawell and Ararat, an unnerving experience because he spent most of it gleefully describing in great detail what happens when at top speed an engine collides with stray livestock.

Occasionally, in their wisdom V-Line shunted us into deeply unglamorous sidings, such as, believe it or not, the Geelong Tip, a.k.a. Siding Breakwater Road, Geelong Racecourse, in March, 1988, when the Governor’s wonderful widowed sister Mrs. Mary Park, her traveling companion Dr. Margaret Haire, and Charles Curwen were all with us.