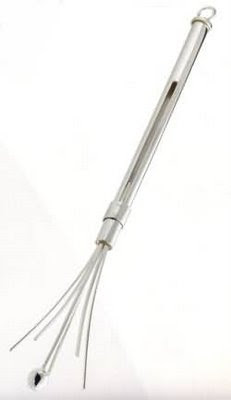 Some time ago, I saw this beautiful small object referred to in print as a “champagne whisk,” but many people throughout the British Commonwealth will recognize, not to say cherish it, as a sadly neglected but once indispensible cocktail party accessory: the “swizzle stick.”

The Oxford English Dictionary traces the earliest appearance of this attractive term to British colonists at leisure in the tropics, namely John Whetham Boddam-Whetham, a first class cricketer, tourist, and adventurer, who mentioned the swizzle stick as a West Indian novelty in his useful Roraima and British Guiana, With a Glance at Bermuda, the West Indies, and the Spanish Main (London: Hurst and Blackett, 1879). 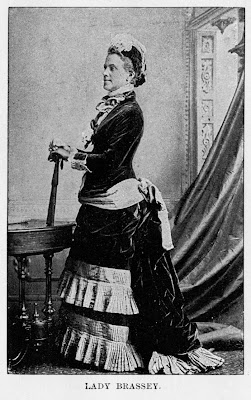 Six years later, whilst visiting the Caribbean on board their yacht, the Sunbeam, Lord and Lady Brassey were so taken by the swizzle stick that, in due course, after returning to England, they distributed them widely as amusing gifts.

Experienced swizzle stick users appreciate the benefit of expelling the majority of large bubbles from a glass of champagne, thereby allowing the tiniest ones to do their job of seduction unimpeded. A gentle stirring motion is all that is necessary, because anything more vigorous may cause swizzle stick misadventure, spillage, or some other embarrassment.

Swizzle sticks may also be used to attract attention, or for self-defense.
Posted by Angus Trumble at 9:42 AM