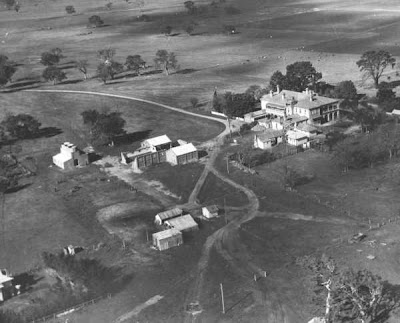 near in was created by my great-great-grandfather, William Pearson (q.v.).

The first homestead went up in the early 1860s and was a pretty, small, plain building. It survived the decision, around 1890, to create a far bigger one. I think that first house is the farther distant portion of the middle block of buildings you see in the next photograph, or else the shed in the foreground. In any case, it was a basic, pioneering affair: 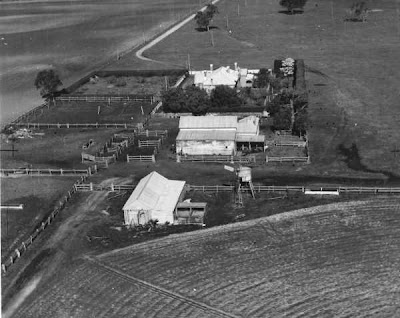 The house farthest away postdates the Pearsons.

The elder William Pearson’s third and eldest surviving son and namesake, my great-grandfather, took up when his father died in 1893, and set out to build the present house in stages, and also laid out what must have been a very beautiful garden, dotted with cherry trees, two huge mulberries, walnuts, and apricots.

Only the front portion of the house was ever completed, and a far bigger house was actually envisaged but those grand plans presumably fell victim to the depression of the 1890s. 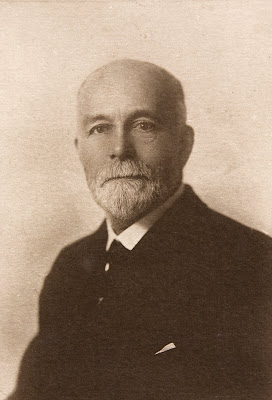 At the end of 1912, William Pearson fils (above) took his whole family on an extended visit to , with side-trips to for skiing, and to Menton in the south of , where Granny flew in an amphibious aeroplane. This was early in 1914. Granny and her younger sister, Aunt Mim, and their mother Sophie Pearson were all presented to the King and Queen by the wife of the Australian High Commissioner at an evening Court held at Buckingham Palace.

When war broke out, Granny’s brother, Uncle Roy, joined the British army as a second lieutenant in the Cavalry Brigade, and to some extent from then on the family was torn between and .

In the end, apart from a brief return visit to in 1915, they stayed in for the duration of World War I. Aunt Mim married a British army officer, Pat Jackson, who was first wounded, and eventually killed in , just before the armistice.

William Pearson died in 1919, and Kilmany Park was sold a few years later. The property was subdivided, and the house was turned into a grim Presbyterian Boys’ Home. It has now been rescued as a bed-and-breakfast retreat. Granny’s ashes are under a pretty tree on the edge of what was originally the croquet lawn at the front of the house.


The psychic apogee of the Pearsons’ residence at was the visit in the winter of 1901 of the Duke of and , the future King George V, who came to Australia to open the first Federal Parliament of the Commonwealth in .

The only purpose of the Duke’s visit to was to spend the day shooting quail, and Granny recalled the visit in an unpublished memoir written in the early 1970s:

A large marquee was put up in one of the paddocks called the Second Plain, where they all had their lunch. My brother Roy and a cousin, Sid Gooch, were allowed to go out with them, much to our envy.

The Duke and his staff came to in the royal train, sleeping on it, and my father drove him out from in the wagonette with a pair of gray horses. They were borrowed for the occasion from a man named . I don’t know why our browns were not used.

On the way out, they were stopped by an old black fellow who used to camp with his wife near Wurruk. He was King Billy, and wore a brass chain around his neck with his name on a plaque. He had native spears, shields, and boomerangs, which he gave to the Duke. Afterwards someone asked him how he liked the Duke, and he replied, “Oh! He seemed a nice young fellow.”

Our excitement as we saw the wagonette coming up the drive was intense. They stopped for a few minutes whilst mother was presented, and then drove on to the shoot. It was a very successful one, as the quail were plentiful.

Through the afternoon the Duke said to my father, “Are there any other birds to shoot?” and piped up, “Plenty of parrots at the house.” So up they came for afternoon tea, and a shoot round the garden.

I often wonder that there was tea ready for the party. There must have been quick scone-baking whilst he shot parrots, because the original idea was that he would not come to the house.

Then he planted the oak tree, which is still at Kilmany, with one of Mim’s or my small spades. I still have it.

Someone told the Duke—I expect it was —that there was a koala bear in a tree nearby, so we all went round to see it. was sent up the tree to catch it. He was being a bit slow, and the Duke was shouting out how to do it. shouted back, “Come and do it yourself.” Great laughter all round!

I have the chair he sat on at afternoon tea. It has been re-covered, but I have the old material.

I cannot remember if it was before or after this that we all went to to see the sights of the Duke’s visit. I think it must have been before, as mother and father went to all the functions. I remember one of mother’s dresses so well: pale blue silk with lots of lace. She looked wonderful in it, and I longed for the day when I could wear it.

Later on, Granny took an acorn from the oak originally planted by the Duke of York at Kilmany Park and, in turn, planted it in the sand beside Balmadies at Metung. It grew into a fine, big tree, and still stands outside her bedroom window.

Posted by Angus Trumble at 8:43 AM