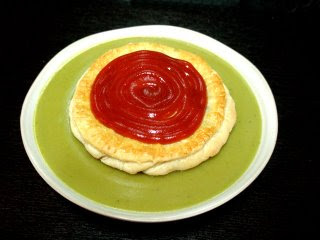 A “pie floater” is a traditional dish served at pie carts in Adelaide, and elsewhere in South Australia, the purpose of which is to provide sustenance to people attending Australian Rules football matches, and other sporting fixtures in really appalling weather.

The pie floater consists of a traditional, demotic, commercially manufactured Australian meat pie, deposited upside down in a bowl of thick pea soup, with a generous dollop of tomato sauce (ketchup) on top. Salt and pepper, and/or mint sauce may be added to taste.

To the extent that it is not a dish so much as a dare that got out of hand, the pie floater may regarded as a very distant Commonwealth cousin of the Québecois poutine: 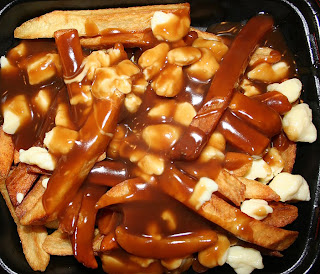 This sobering concoction consists of a mound of French fried potatoes, sprinkled with fresh cheese curds, and sometimes other starchy ingredients as well. The whole is then smothered with brown gravy.

The main justification for poutine is the severe Canadian winter, but there are no comparable grounds for seriously defending the existence of the pie floater, even though Anthony Bourdain, Joe Cocker, and Billy Connolly are said to be fond of it.

A well-known version of the pie floater, popular with tourists, cashiered sailors, indigents, hoodlums, tarts, medical students, and off-duty policemen may be purchased from Harry’s Café de Wheels, a pie cart long situated near the wharves at Woolloomooloo in Sydney, but Adelaide remains the psychic epicenter of this odd culinary experiment.

In 2003 the National Trust of Australia saw fit to designate the pie floater as a South Australian heritage “icon.”

Posted by Angus Trumble at 1:32 PM