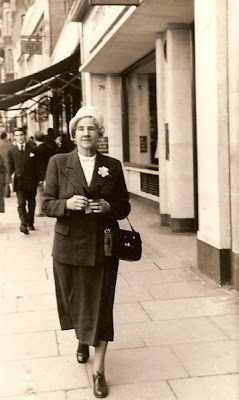 Iona Heather Trumble, my paternal grandmother, was the daughter of Alexander Campbell, a director of the Broken Hill Proprietary Block 14 Company, Ltd., .

Great-grandfather was a mining engineer, and migrated from some time in the 1870s or 1880s.

The company owned property at Broken Hill in New South Wales (obviously), but it developed an interest in the King Island Scheelite Company in Bass Strait (est. 1915), of which Great-Grandfather Campbell was chairman from 1917.

The Campbell family lived in Brighton, and spent their weekends and holidays at Portsea. Campbell’s Road was named after my great-grandfather, who, I seem to recall, first surveyed it. Owing to the Scheelite venture, the Campbells regularly sailed from Portsea or Sorrento to King Island aboard the two-masted wooden screw steamer S.S. Wauchope, occasionally bringing with them Nan’s pony.

and her father were on board the Wauchope on August 1, 1919, when she was anchored at Portsea for a compulsory quarantine stop of seven days. It is hard to know what bio-hazard was thought to emanate from , but presumably the authorities knew what they were doing.

The ship was carrying a cargo of 250 tons, including flour, sugar, maize, machinery, a motor car, drapery, gasoline, oil, and, unfortunately, twenty-eight cylinders of acetylene gas for the lighthouses on .

Five crew and seventeen other passengers were also on board. At 7 o’clock that evening a fire broke out in the hold of the ship.

The passengers were straight away ordered to pack their belongings, and board the two lifeboats. Despite their best efforts to bring the fire under control, naturally the cylinders of acetylene gas produced a large explosion, and the captain and crew were forced to abandon ship at 11.oo o’clock. The burned out hulk was later scuttled in .

Over the years the family developed a close friendship with an old local on King Island, an unmarried Scot, who knew the ropes, and was ever after affectionately known as Uncle Jock. The friendship lasted, and eventually and Pa looked after Uncle Jock in his old age and, when he died, arranged for him to be buried in a plot they purchased for him at Springvale.

At least they thought they purchased it.

Some years ago, Uncle Alec received a telephone call from a cheerful young person at Springvale, who informed him that Uncle Jock’s tenancy had effectively “expired.” In the absence of any next of kin, was there anything in particular that Uncle Alec wanted to do with him now?

The options seemed to be either to pay a substantial fee for another expensive but finite period of repose, and thereby lob this problem on to the next generation of Trumbles twenty-five years hence; effectively to authorize Springvale to deposit Uncle Jock in an unmarked mass grave, or to seek alternative accommodation.

After some consideration, Uncle Alec rang the local authorities on , inquiring whether a spot could be found for Uncle Jock in the local cemetery. He explained that as an early resident of the island in theory Uncle Jock’s claim for a plot was as good as anyone’s.

He need not have worried. Uncle Jock, they said, would be more than welcome, in return for a fee so modest that Uncle Alec felt it necessary to ask a tactfully phrased follow-up question as to how long Uncle Jock’s next period of interment might reasonably be expected to last. The answer was unambiguous, in that refreshingly characteristic Tasmanian way:

“Oh, forever,” said the man at the King Island cemetery.

Nan’s father, Alexander Campbell, a doughty Scots Presbyterian, married Jane Heather, the daughter of George Frew, a Catholic grazier, who owned property at Tabor in the western district of Victoria, not far from the southern end of the Grampians.

The bizarre solution to the sectarian problem posed by this mixed marriage was to split the difference, and to agree that my grandmother and her siblings would be raised “Church of England.”

was a keen sportswoman, and a champion golfer.

Here she is in London in 1949, where my grandfather T. C. Trumble (Pa), was one of the instructing solicitors to Garfield Barwick, Q.C. (a future Chief Justice of the High Court of Australia) in the famous case of Commonwealth of Australia v. The Bank of New South Wales, which was decided on appeal by their lordships of the Judicial Committee of the Privy Council.

Nan and Pa sailed to with the Barwicks aboard the Stratheden in 1948, and took up residence at Claridge’s for eighteen months, while the case was prepared, argued, heard, and ultimately decided in the banks’ favor, in effect overruling the High Court of Australia, and overturning the Chifley government’s Banks Act of 1947.

The case was complex, and partly hinged on the constitutional issue of free trade between the states. Pa’s client was actually the government of the state of , whose interest in the matter arose from the serious implications of the proposed nationalization of the Australian banks for the cultivation in and around Mildura of raisins.

Rarely, if ever, has dried fruit assumed such constitutional importance, and the case stands as a tribute to the ingenuity, not to say brilliance, of my grandfather’s legal reasoning.

Pa went to school at Brighton Grammar, fought in World War I in the Royal Naval Air Service, and single-handedly disabled a German U-boat from the cockpit of his Sopwith Camel biplane, an achievement that was mentioned in despatches.

He became senior partner of Malleson, Stewart, and Co., as it was then known, and sat on the boards of several public companies. He was a churchwarden at of , Malvern.

Posted by Angus Trumble at 9:09 AM