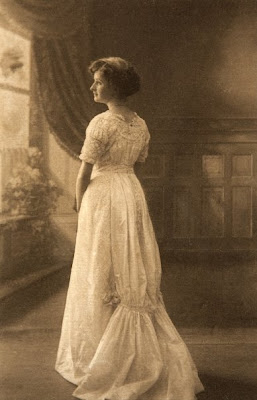 My grandfather, W. A. Borthwick, was an eccentric but by all accounts lovable man. Uncle John recalled that he used to torment his sisters, especially Aunt Jean (above), by ostentatiously examining the lunulae on their fingernails for evidence of creole ancestry or, as he put it in those bad old days, “a touch of the tar brush.”

So irritated by this slur upon the genetic inheritance of their mother, Ada Maud Mary (Bell), known affectionately to her grandchildren as “Da,” in old age Aunt Jean was careful to transcribe not her own recollections, which would have been equally fascinating, but those of her great-grandmother Wallen, which she wrote when, as an old lady, she lived in a large house in Hawthorn called Harlech that belonged to her son, the businessman and journalist Uncle Robert Elias Wallen, sometime chairman of the Melbourne Stock Exchange, and Fellow of the Royal Statistical Society.

Mr. and Mrs. Francis Robertson Wallen, my three times great-grandparents, and seven of their eight children sailed to during the Gold Rush aboard the famous . Robert, probably their eldest son, who was born at in on June 5, 1831, came slightly ahead of them on the Rip Van Winkle. The cargo was consigned to him; he was only twenty-one years old.

Both ships reached the total chaos of Hobson’s Bay and Sandridge (Port Melbourne) in November 1852.

Francis Wallen was an Irishman from Co. Donegal, who spent the early part of his life in Trinidad and St. Kitts, where the family had sugar plantations. His wife, Catherine Anne, was the daughter of a sugar planter called Charles Hobson, and was born on the of in the Lesser Antilles on May 6, 1812, during the eruption of Soufrière, the volcano on . Her mother’s Audibert family, which had Huguenot connections, actually fled during the Terror, and sought refuge on their sugar plantations in the West Indies which by then were on islands controlled by .

Not long before her birth, during the uprising of 1796, in a naval raid, French cannonballs destroyed Mr. Hobson’s house, and shortly afterwards enemy marines destroyed what remained, even his furniture. Between the hurricanes and this loss, the family’s circumstances were much reduced, and it became necessary to take Catherine, her brothers Charles and Edward, and her sister Eliza to , together with a black nurse called Madelon.

The Hobson family sailed back and forth between England and the West Indies numerous times, so their fortunes cannot have been too badly damaged, and the purpose of these voyages was to place the children in an array of thoroughly ad hoc, presumably inadequate, and characteristically disorganized Regency educational establishments, such as the small private school run by the three unmarried Misses Babington in Chelsea, sisters of “the great Dr. Babington of London,” and to arrange for guardians and others, including Mrs. Aston and “Aunt John,” who from time to time stood in loco parentis while Mr. and Mrs. Hobson were in Dominica, gradually churning out more and more children.

Aunt Jean was careful to note that in the the term creole was often used to describe anyone who was born and raised locally, regardless of ethnicity, or, as she put it, “everyone, of any race or color, human, animal, or feathered.”

Undeniably, the Wallens of Trinidad and St. Kitts owned slaves on their plantations, but when one of Mrs. Hobson’s Audibert cousins on St. Vincent, an eldest son no less, eloped with a colored girl, his French-speaking mother, Mrs. Hobson’s aunt, thought it such a disgrace that she could not bear to remain on the island.

Obviously desperate, she took the whole family to Canada, suffered immensely from the cold, lost everything, then came back again, this time to Martinique, where she set up a little mixed business eventually much patronized by “everyone,” including the Governor of St. Vincent, Admiral Sir Charles Brisbane (1808–29), “who always got his champagne by the dozen.”

Though perturbed by that bit about the mixed business, Aunt Jean seemed to think all this was reassuring.

And regardless of my grandfather’s imaginative insinuations in respect of the lunulae—he was certainly right about at least one collateral branch—our Borthwick–Bell–Wallen–Hobson–Audibert creole matriline threads its fertile way through the full extent of the nineteenth-century British Empire, from and to the Windward Islands, , India, and .

Posted by Angus Trumble at 3:32 AM