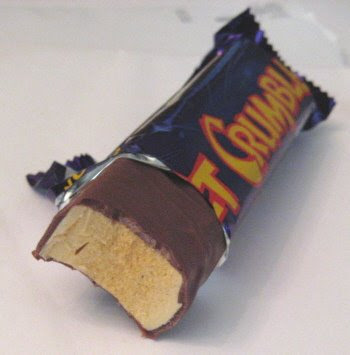 Violet Crumble is a popular Australian delicacy, now manufactured by Nestlé at their Campbellfield premises near . It is composed of a crunchy, crumbly, sugary, synthetic approximation of honeycomb, a substance, moreover, that is coated in chocolate.

Violet Crumble was invented in 1913 by Abel Hoadley (1844–1918), following the incorporation in the state of Victoria of Hoadley’s Chocolates Ltd.

The decision to concentrate on chocolate was shrewd, and Hoadley’s Chocolates’ first assortment was sold in a purple box decorated with violets, a tribute to his wife’s favorite flower, once in happier times so venerated, but now sadly, surprisingly, and almost universally under-appreciated.

As usual, Serge Lutens seems to have grasped the significance of this yawning aesthetic void, and the recent launch of his insolent, sensual Bois de Violette may help to provide a remedy. According to an informed source:

Bois de Violette is the most luxurious violet fragrance that we have ever encountered...This violet is not a demure Victorian beauty. It is a sultry enchantress, a forest nymph, a wild and dangerous seductress. Bois de Violette is also one of the softest and most feminine woody scents: the subtly candied cedar note here is buttery and supple, an enveloping, comforting note whose gentleness provides a charming balance to the come-hither aroma of violets. One of the greatest fragrances of all time, a modern masterpiece.

In any case, Hoadley’s Chocolates’ original assortment contained an amusing piece of complementary honeycomb, which proved so popular that Mr. Hoadley decided to produce an individual honeycomb bar.

Because the pieces of honeycomb tended to stick together, it was decided to dip them in chocolate, to keep them separate, dry, and crunchy.

At first Mr. Hoadley intended to call his new bar “Crumble®” but was advised by an ancient firm of Melbourne solicitors that, for reasons that are still unclear, it would not be possible to protect that name as a registered trademark. Thinking of Mrs. Hoadley (Susannah Ann née Barrett), therefore, he registered “Violet Crumble®.”

Thus yet another Australasian cultural landmark was created.

It was on the night of the sophisticated Junior Common Room cocktail party at Trinity College, Parkville, in 1983, whilst pausing for refreshment in Jeffrey Sheather’s comfortable Behan sitting-room, that, dressed as Alice in Wonderland, and accompanied by Michael Pickering, who was channeling Esther Williams, my dear friend Clare Florence, a refugee from Brisbane, clearly inspired by free association, first applied to me the charming nickname “Uncle Crumble,” now often abbreviated to “Crumble,” a bouquet-toss of rare affection, which I shall always prize. 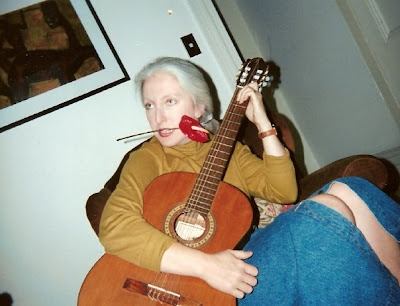 Clare is now an attorney, and, when not engaging in Kissinger-level shuttle diplomacy in the Middle East and elsewhere, together with their ever-growing, highly skilled domestic staff, she, her husband Bill Condie, and their son Jack now reside in .
Posted by Angus Trumble at 8:10 AM