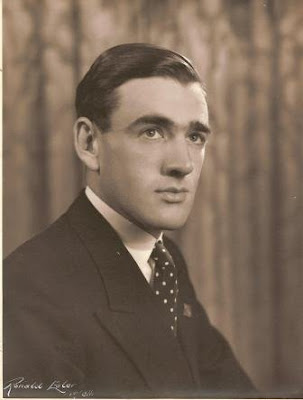 My dear father, Peter Campbell Trumble, was the eldest of the four sons of Tom Compson Trumble and Iona Heather (Nona), and was born at home in , Sandringham (), on January 31, 1922.

Having toyed with the idea of becoming an architect, Peter decided instead to follow his father and grandfather (J. W. Trumble) into the legal profession. In 1940, he joined the firm of Malleson, Stewart and Co., as it was then known, and was articled to the late Roy McArthur.

With the outbreak of war in the Pacific, Peter interrupted his four-year clerkship and joined the Royal Australian Navy, serving between 1942 and 1946 as an able seaman aboard H.M.A.S. Warramunga, H.M.A.S. Nizam, H.M.A.S. Quadrant, and H.M.A.M.L. 424, a patrol boat working along the coast of Papua New Guinea, where he contracted malaria. On September 2, 1945, he was present in when formally surrendered to the allied powers aboard the U.S.S. Missouri.

After the war, Peter enrolled at the , graduating Bachelor of Laws on the same day as his brother Colin in 1948. During that time he lived at home at 17, Huntingtower Road, Armadale, and appeared in a number of university revues, singing “I’m a Flaming Beaut’ in Me Bathing Suit,” a performance which remains etched upon the minds of those fortunate enough to have witnessed it.

In a moot court on July 7, 1946, Peter Rufus Trumble was found guilty of bigamy after damning evidence was given by Hepzibah Abigail Trumble (née Paton) and Simone Simone Trumble (née Turnturtle). He was sentenced to celibacy for life. Some days later at a party he met Helen Borthwick of Noble Street, Geelong, who rather boldly said that she was prepared to wait. Luckily she didn’t have to wait quite that long. They were married on June 9, 1949, in the chapel of St. Peter at Melbourne Grammar.

Peter and Helen first settled in , and their family grew rapidly. Nick was born in 1950; Simon followed in 1952; Hamish in 1956, and, after a long, regenerative pause for reflection, I arrived in 1964. Our photograph was taken about six months later.

Peter was admitted to legal practice in 1949, and, with Colin, rejoined Mallesons, which remained his professional home until his retirement. He was a partner in the firm from 1953 to 1985, and senior partner – as his father had been before him – for the last nine of those years. He remained as consultant to the firm after 1985, a role in which he always responded to requests for help, although, as he put it, “those making requests have been reluctant to say, when I enquire, whether they feel bound by my learned opinion.”

His professional, corporate, and charitable activities were numerous. He was president of the Law Institute of Victoria (1963–64); director of the Housing Loans Insurance Corporation (1965–75); honorary treasurer (1966–78), then president of the Medico-Legal Society of Victoria (1978–81); a member of the Victorian Law Foundation; a member of the board of management of the Royal Melbourne Hospital (1970–85), then its vice-president (1978–82) and president (1982–85); president of the Victorian committee of the Commercial Law Association; chairman of the board of governors of the Windermere Hospital Foundation; member of the council of Lincoln Institute, and director of many public companies including Kleinwort Benson Holdings, Ltd. (1982–86), Containers, Ltd. (1975–81), Australian Carbon Black, Pty. Ltd. (1975–84), the Collier Custodian Corporation (1975–1989), and Hill, Norman, and Beard, Pty. Ltd. (1970–1989), of which he was also chairman.

He was a director (from 1975) then chairman (1983–89) of the board of the Colonial Mutual Life Assurance Society, Ltd., in which role he was made an honorary chieftain in Fiji. Peter was a member of the Interstate Corporate Affairs Commission; president of the Victorian Society of Notaries (1978–80); chairman of the Victorian Auditors’ Board (1978–82); a director (from 1976) then chairman (1979–85) of the Victorian Solicitors’ Superannuation Fund, and president of the Australian Club. He was made a Notary Public in an enormous document, handwritten on parchment, signed and sealed by the Archbishop of Canterbury.

In a series of humorous articles he wrote in 1986 for the Law Institute Journal, Peter reflected on the breadth and variety of matters he encountered in his legal career:

I was and have remained the only partner [at Mallesons] recognised as a compleat lawyer... articled clerks and junior solicitors would occasionally knock on my door about some matter, excusing the interruption by saying that their responsible partner had said “ask P. C. T., he’s tried everything.”

Peter recalled an occasion in the 1950s when a sole country solicitor practicing in died suddenly. He recalled the experience thus:

The staff consisted of a married woman who acted as receptionist, telephonist, and typist. She had no knowledge of shorthand, the solicitor had no tape recorder, and the phone was bolted to the wall dividing the office from the public bar of the hotel of which the office was part. Mallesons had acted for many years as the late solicitor’s city agent. He had appointed some of us as his executors, and it was absolutely essential that his practice be kept going until it could be sold, particularly as it was the only one in the town. For three months I ran the practice with the assistance of one of our elderly clerks who was experienced in conveyancing.

I soon discovered that there is really no such thing as a compleat lawyer, for in that period I had to deal with matters of which I had no previous experience or knowledge, including local government (because the testator was the shire solicitor); commercial matters relating to village shopkeepers, inn-keepers, car dealers, horse dealers, stock and station agents, and a butter factory; the bowling club; drunks; tarts; bad debtors; clergymen; appearances in petty sessions as both prosecutor and counsel for the defense; the Dog Act, and, of course, the filing of hundreds of tax returns for local farmers and others in the district, many of whom tried to put it over me, and many more who undoubtedly did. When we eventually sold it, I felt a great deal of satisfaction in realizing for the widow the full value of the practice at her husband’s death. (LIJ, May 1986, p. 423.)

It is typical of him that – as well as his work for such varied clients as the late Miss Edith Hughes-Jones; the Country Women’s Association (at whose well-attended annual general meetings in the Dallas Brooks Hall he was usually the only man present; Jean McCaughey will appreciate the awesome significance of this curious fact), and the Toorak branch of the Returned Servicemen’s League (unofficially known as the Heroes’ Club) – that the memory of that brief experience as a country solicitor continued to give Peter particular pleasure long after he had helped to establish his firm as a giant in resources law.

He spent several years in the 1960s and early 1970s representing Cleveland Cliffs in the huge iron ore joint venture project in . A little later he also acted for the Australian Bankers’ Association in the setting up of the first Australian credit card scheme, known as Bankcard.

Around 1960, Peter started building with his bare hands a house at Metung in , in which his family enjoyed many idyllic holidays. He also helped to build the original Belmore Ski Club hut at . The Belmore hut is now gone; the house at Metung is almost finished.

Peter took an eccentric pleasure in unreliable French motor cars (possibly stimulated in that direction by gramophone recordings by Charles Trenet, Jean Sablon, and other stars of the French cabaret), including an old black Citroën with the charming registration “GAY 900.”

He was also attracted to extremely slow sailing boats, most notably an 18 ft. Jubilee-class yacht that was invented in 1935 after a particularly severe gale damaged many small boats moored in . Intended specifically to withstand heavy seas and hard weather, the Jubilee was evidently designed (by W. D. Higgins and Charles Peel, at the instigation of J. A. Linacre, Commodore of Royal Brighton Yacht Club) without the slightest consideration of human comfort. With characteristic optimism, Peter named it Sirocco.

Peter was also a talented draftsman and painter in oils and watercolours. On one occasion he was so pleased to find one of his legal cartoons for sale at a art gallery that he bought it.

He was an equally able composer of light verses, usually describing ridiculous occurrences on holidays abroad, or (when inspired by visits to gloomy Scottish glens) bloodthirsty clashes between his mother’s Campbell ancestors and rival clans – often sending the latter back to the office in airmail envelopes decorated with outrageously embarrassing, instantly recognizable cartoons of his law partner, the late, long-suffering, but good-humoured Ross Macdonald.

In about 1989 the first signs of what would later be identified as Alzheimer’s Disease were noticed by Peter’s family, friends, and colleagues. The condition progressed gradually but steadily, making ever increasing physical and emotional demands upon him and Helen in the retirement to which they had both looked forward.

Despite the heavy demands made upon him by work, Peter was always first and foremost a husband and father.

The latter role cannot always have been easy, because his four sons were in many ways even more eccentric than he was (although, unlike him, none of us ever wore sock-suspenders). However, he never allowed his distaste for cuffless trousers, blue suede shoes, long hair, or lack of prowess at golf (except for Simon, who obviously inherited that gene) to overshadow his pride in Helen’s achievements – Mum graduated B.A. from the University of Melbourne in 1982 – and those of his sons, daughters-in-law and grandchildren, nor the pleasure he took from their company.

Acknowledgment: This is a fusion of four separate addresses delivered by each of his sons at Peter’s funeral at St. George’s Church, Malvern, on October 9, 2000, and an obituary written by Peter and Helen’s old friend Kenneth Aitken which appeared in The Age newspaper (Melbourne) on November 20, 2000.

This beautiful photograph by Ronald Esler of , off in , was taken sixty years ago, at the time of Peter and Helen’s engagement in 1948.

Posted by Angus Trumble at 1:56 PM