A Touch of the Vice-Regals 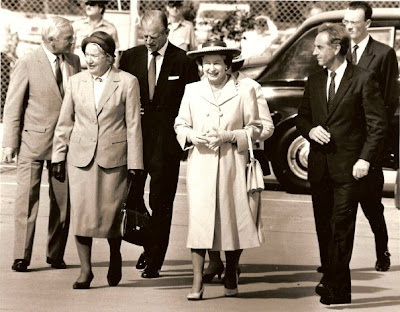 There is a point early in vice-regal terms of office when, at times, either separately or in tandem, the incumbent and his or her spouse may be temporarily affected by certain vibrations arising from their elevated standing. The shorthand term used by household staffs of several generations to describe this disorder is “having or getting a touch of the vice-regals.”

At worst, in rare instances, the sufferer may for brief periods behave like Middle European royalty.

Davis and Jean McCaughey were unusual in that so far as I am aware they never once suffered from this inconvenient vice-regal syndrome. Indeed, at times they were inclined instead to travel in the opposite direction.

Certainly they seemed never to notice when the organizers of huge events like the V.F.L. Grand Final paid far more attention to starlets and political hacks than the sovereign’s representative.

At times it was incumbent on their staff to attempt to stand on ceremony on their behalf, when clearly they would never themselves voluntarily choose to do so.

On Grand Final Day in 1988, for example, at the enormous, chaotic lunch put on by the V.F.L., one sensed that few people in the room even knew who Davis was. But on that occasion it so happened that Olivia Newton-John was present in the room, swamped by admirers and Les Patterson lookalikes – she was to sing the National Anthem.

A generalized sense of astonishment overcame the entire gathering when Miss Newton-John beat a path through the throng, and inexplicably threw her arms around Davis – whom, of course, she knew well because her father, Bryn Newton-John, was Davis’s predecessor as Master of Ormond, and both families grew up as neighbors.

As a result of this charming gesture, proffered so spontaneously by such a famous woman, one sensed in respect of Davis and Jean in all corners of the room, a not too subtle retraction of the jib of familiarity and offhandedness, and in its place the hoisting of effulgent spinnakers of respect.


Here I am at the age of twenty-three: evidently not doing my job properly - which is always to keep out of press photographs.

This is The Queen and The Duke of Edinburgh, accompanied by the Governor and Mrs. McCaughey, and the Premier, the Hon. John Cain, M.P., and Mrs. Nancye Cain (obscured), on what used to be called the V.I.P. apron at , Tullamarine, about to board an R.A.A.F. flight bound for , Friday, April 29, 1988.

The Rolls still lives with the Governor-General, at Yarralumla in .

Posted by Angus Trumble at 7:56 PM