Letter from Fort Worth 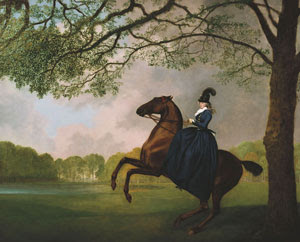 I take it all back about Texas (Letter from New Haven). Everyone is ‘y’all,’ and although Fort Worth is as flat as a pancake, it has an Edward Hopper-ish quality. From the direction of the cattle yards the sound of railway engines shunting back and forth drifts across the city. Real cowboys descend from pick-up trucks, and go shopping for colourful boots. The social column in this morning’s Star Telegram, which is all about a genteel sit-down literary afternoon tea at the Public Library, mentions somebody with a ‘Dresden complexion.’ Presumably this means milk-white and creamy like the porcelain, not bombed to smithereens and rebuilt years later. Anyway, the cowboys are here for the Texas rodeo, and I am attending a conference at the Kimbell Art Museum about George Stubbs.

After the last session, a delegate takes me home to River Crest, Fort Worth’s single hill. Her house is a château with mod cons, set among walnuts and magnolias, overlooking the west fork of the Trinity River. Curiously, neighbours let themselves in through the front door one by one, and join us for drinks. Mine comes in what can only be described as a sterling silver bucket, wet and freezing. House guests materialize from distant regions, including Mrs. G., an experienced dressage rider and trainer visiting from London who exercises horses for the Queen. We talk side-saddle.

I have been intrigued by one of the portraits in the Kimbell’s Stubbs show: Letitia, Lady Lade (Royal Collection). She too is slightly ‘Dresden,’ and wears a large hat. Her mount is rearing. You can tell by the outstretched front legs; skilled riders in equestrian portraits by Velázquez or statues by Bernini are doing something entirely different. They are performing a levade, one of the most difficult, controlled movements in high-style dressage. It is for the horse a balancing act, much more like a crouch than a rear, the weight thrown back on the hind legs, the front legs tucked in close to the breast. But whereas Philip of Spain or Louis XIV conjured this movement by cueing with their thighs and buttocks, I wonder what you can do about a rearing horse when riding side-saddle. Who better to ask than Mrs. G.?

‘How much do you know about horses?’ she asks, drily.

I sense I have gained full marks for interest, but failed on general knowledge. Mrs. G. turns back to the illustration in the catalogue.

‘It’s impossible.’ She raises her eyebrows. ‘You couldn’t stay on like that. You know, not unless you forced your left foot right down in the stirrup.’

Her hands gather up invisible reins.

‘Troublesome mare, too.’
‘Really?’ I have no idea what she is talking about.
‘Absolutely,’ she continues, shaking her head. ‘Ears turned back. Sure sign of mischief, or anger. No, it’s a nonsense – unless Stubbs wanted to make the lady look as if she hadn’t the foggiest notion of what she was doing.’

According to Malcolm Warner’s catalogue essay, Letitia Darby (alias ‘Mrs Smith’) emerged from obscurity, an adventuress, and was by the mid-1780s firmly established as mistress to the Prince of Wales. Slightly later she married his crony, the racing enthusiast and card-carrying rake Sir John Lade. Lady Lade was famous for using bad language, and was held partly responsible for the Prince’s unpopularity. Stubbs painted her portrait in 1793. So maybe the picture was a horsy person’s joke at the expense of the enterprising Lady Lade, whom Stubbs shows floundering, side-saddle, on an angry rearing horse.

But she doesn’t look as if she’s floundering.

Back in New Haven, I am tickled to discover in the glorious new Oxford Dictionary of National Biography an article about the unattractive ‘racehorse owner and miser,’ Michael Lade, who, despite years of failure, eventually did well at Newmarket. In 1797, he won the Oatland Stakes with his bay colt ‘by Dungannon out of Letitia.’ Letitia. How many unrelated men with the surname of Lade could be associated in the 1790s with famous Letitias, human or equine? Though the ODNB does not say so, Michael Lade must have been related to Lady Lade’s husband Sir John.

Now, Stubbs certainly painted Dungannon, who was owned by the bouncy Irish racing identity Dennis O’Kelly. That great picture, which belongs to the Earl of Halifax, is also in Fort Worth just now. And Dungannon was the son of Eclipse, whom many consider the greatest racehorse of all time, a great-great grandson of the Darley Arabian, one of the three miracle-working stallions who came to England in the late seventeenth and early eighteenth centuries and, with the vital cooperation of local mares, brought about the thoroughbred revolution.

But what about that dam Letitia?

If Lady Lade had been really lousy on horseback, and Stubbs’s portrait were a kind of joke, would anyone who rejoiced in the name of Lade and loved breeding thoroughbreds bother to name his mare after her? I doubt it. Instead, I have a feeling Lady Lade was a pretty good whip, and that Stubbs did not worry too much about the disposition of ladies’ feet when riding side-saddle.

I shall definitely come back to Texas.
Posted by Angus Trumble at 12:05 PM