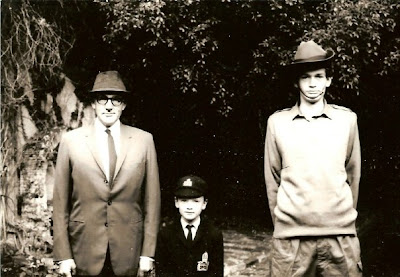 This is my father, Peter Trumble, on the left; my brother Hamish on the right, and me in the middle – on my first day at school in Melbourne, some time in late February 1970, when I was five and a half years old. Hamish must have been fifteen by then, and is wearing his cadet corps uniform, including the famous Australian ‘digger’ or servicemen’s slouch hat. He now lives in South Gippsland with his wife and their two little boys, Mungo and Roy. I am wearing my new school uniform – navy blue woolen blazer, light blue shirt, navy blue tie and peaked cap. (I remember going into town with Mum to get fitted out at Buckley’s.) The crest consists of a bishop’s miter and an open book with the gruesome Latin motto ora et labora – pray and work. My father here wears a suede hat, delightfully and uncharacteristically rakish for the period. He was an attorney, and forty-eight years old. We are standing outside the front door of our house in the leafy suburbs of Melbourne, and presumably my mother, or conceivably one of my two other big brothers (Nick, 19, or Simon, 17), was behind the camera. The tree in the background is a pomegranate, and there is an ornamental fountain built against the garden wall on the far left. I remember the spout was the bronze head of a lion, and the water trickled through its teeth. The house was pulled down in about 1979.

I had this photo printed (badly) from the original negative some time in about 1986, and I have pinned it over my desk wherever I have lived since then: Rome, Venice, Melbourne, New York, Adelaide, then Canberra briefly, and, now, New Haven, Conn. I do not really understand why I love it, except that it partly captures my father’s weird good humor which was almost the very last thing that Alzheimer’s disease took away from him before he died.
Posted by Angus Trumble at 11:11 AM