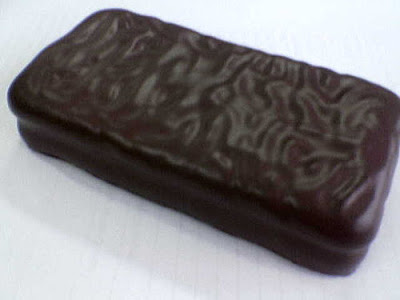 The Tim Tam is a delicious chocolate biscuit (which means cookie) that is manufactured by Arnott’s Biscuits Ltd., of . Approximately 35 million packets of Tim Tams are sold in every year.

Tim Tams are composed of two layers of chocolate malted biscuit, separated by a slightly aerated chocolate-cream filling, and coated in a thin layer of chocolate that carries a hint of buttery caramel.

The active ingredients are a closely guarded commercial secret, but evidently they include milk solids, cocoa, salt, and traces of peanut, other nuts, seeds, and egg. Australian and New Zealand laws also require the disclosure of the following colors: E102, E110, E129, E133, E150; the raising agent E500; the emulsifier E322 (soy), and what is somewhat elusively described as “flavoring.”

The Tim Tam finally commenced production in 1964. It was named after the eponymous thoroughbred three year-old bay colt who in 1958 at Churchill Downs in Louisville won the Kentucky Derby by half a length: 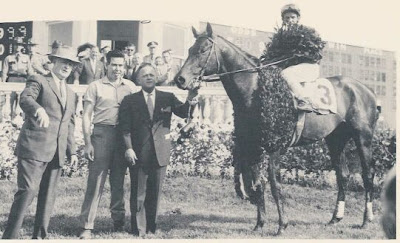 Tim Tam by Tom Fool out of Two Lea was bred by Lucille, Mrs. Eugene Lawrence Markey, Jr., the widow of Warren Wright, Sr., heir to the Calumet Baking Powder Company fortune, who left her his famous stud, Calumet Farm at Lexington, Ky. The legendary Ismael Milo Valenzuala had the mount (above).

According to Mrs. Markey, the four-legged Tim Tam was named after an intimate friend of her second husband, the much-decorated Rear Admiral “Gene” Markey. The admiral, originally a Mississippian, was also a successful author, Hollywood film producer, and screenwriter. Lucille Parker Wright Markey was his fourth wife; the Admiral was previously married to Joan Bennett, Hedy Lamarr, and Myrna Loy.

As a member of the British aristocracy, “Tim Tam,” the Admiral’s shadowy friend, apparently wished to preserve his anonymity. However, an indiscreet secretary at Farm later revealed that Tim Tam was more likely to have been named after Timmy, Mrs. Markey’s Yorkshire terrier.

In any event, the well-connected Australian biscuit mogul, Ross Arnott, who witnessed the running of the 1958 Kentucky Derby, thought that Tim Tam was the perfect name for his new chocolate biscuit, but research and development seems to have taken nearly six more years.

For some reason is the only state in which genuine Arnott’s Tim Tams are now sold. They may be found at R. Field Wine Co. at 1460 S. Beretania; Don Quijote at 801 Kaheka; various Long’s Drug Stores, and other outlets in downtown Honolulu.

In the early to mid-1990s Arnott’s Biscuits Ltd. became yet another limping Australian antelope on the edge of the globalization herd, and were in 1997 most regrettably bagged by The Campbell’s Soup Company Inc., of which they remain a wholly owned subsidiary. O tempora, O mores.

Posted by Angus Trumble at 2:23 PM