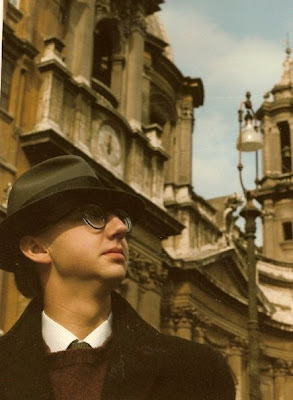 When Adam and Anne paid me the beautiful compliment of inviting me to say a few words to you this evening―about Adam―his instructions were very clear: “You’ve got to say nice things about me,” he said, “and be funny.”

Mindful of this, I thought of preparing two speeches, one nice and one funny, so that you, the audience, could choose which one you wanted to hear. But after several days’ research and development I concluded that this might give you the impression that all the nice things that you could say about Adam were not necessarily funny, and that none of the amusing things were nice, which is quite clearly absurd. In the end I decided to treat him as I would treat one of the valuable Old Master paintings I look after in the Art Gallery where I work―with extreme caution.

Adam’s provenance is flawless. He was originally the right hand flap of a large and finely wrought triptych―a picture in three parts―the result of an unusual collaboration between simple craftsfolk from Worcestershire. Adam is typical of their mature style, which normally consists of well-rounded forms, meticulous construction, richness of colour and texture and a particular interest in magnificent, large noses. Unfortunately the triptych, their finest work, was divided almost as soon as it was made, and Adam, the latest section in date, was in 1980 brought to Melbourne from sun-drenched Birmingham.

He spent an initial period in the collection of Melbourne Grammar School, an institution notable for its crudely rusticated bluestone architecture. It was in this fun-palace that Adam was first pointed out to me, and I to him by none other than a future A.F.L. superstar―true story. Later, I was able to study Adam in the less gloomy surroundings of Trinity College and the University of Melbourne medical school. Many of you will remember him as a much-loved decorative feature of both places.

During this period taste increasingly favoured works with Adam’s compact dimensions and his distinctive pale pink flesh tones. Several critics noted the ease with which he shone in many different situations. For example, he was from time to time used as a theatrical prop, though fortunately no damage was caused by all the extra handling. Later he was lent to several foreign countries such as Ghana, Turkey, Hungary, Italy, Wales, England―he has attracted a great deal of attention when temporarily reunited with the other two flaps in England―not to mention the United States of America.

There were other, less publicised regional engagements, mainly in the freezing wastes of central Victoria: Shepparton, Wangaratta and Traralgon in Gippsland. Lately there has been a period in Darwin, that amusing, Salzburg-sized city that clings to the northern extremity of the continent. None of these movements and extreme variations in temperature and humidity has produced any noticeable deterioration in Adam’s physical condition. He requires only sensitive lighting and regular surface cleaning, which is entirely normal for a work of his age and size. Certain areas of patination, particularly on the upper regions of the head, have been noted lately, though these are entirely natural and I would not recommend any intrusive conservation treatments.

The subject matter of Adam is very unconventional. On the face of it, he appears before us as a humble doctor or medical scientist, normally wearing the regulation white coat and clunky stethoscope of his chosen occupation. At times a certain heightening of colour and sharpness of tone have been noted by members of the nursing and allied health professions. Indeed the functional architecture and atrocious décor of large public hospitals would seem to provide a logical context in which to display him, surrounded by graphs, test tubes and Petrie dishes.

X-radiography and infra-red reflectography tell a different story, however. Concealed beneath the thick outer medical paint layer is Adam the composer of songs and lyrics, Adam the cabaret artist, Adam the theatrical impresario, Adam the artist’s muse, pamphleteer, gourmand. By his natty attire―shirts by Thomas Pink of St James’s, hats by Troncarelli of Rome, the list of decorative motifs is long―to say nothing of his taste for word play and clever quips, or his regular dalliances with music and theatre, Adam leans towards the subject matter of modern life, in particular the sphere of the café, the salon and the haute-monde. Which brings me to the purpose of this evening’s gathering, surely the most distinguished to arrive in this neighbourhood since the nineteenth century when Lyster’s Opera Company, Lola Montez, Charles & Ellen Kean, among very many other great show business personalities, played the goldfields.

Today marks the beginning of a new chapter in the history of Adam. Over the years several connoisseurs have sought to acquire him for their collection but fortunately none has succeeded before now. I am convinced that by her shrewd and spectacular acquisition Anne has today exhibited formidable aesthetic judgment. And I predict future additions to her collection of closely-related miniature works of equal if not greater quality.

I can count on the fingers of one hand friends as true and dear to me as Adam. In fact there is still room for a couple more, and I have a full set of fingers. I am sure that many of you will feel the same way. Anne, we congratulate you, we wish you both every happiness and it is an honour and a joy to invite you all to charge your glasses and rise with me to drink a toast. Long life, happiness and length of days. Ladies and gentlemen, I give you the attendants: Sue and Anna, Ben and Simon.

Posted by Angus Trumble at 3:14 PM