William and Helen Borthwick at Raeshaw 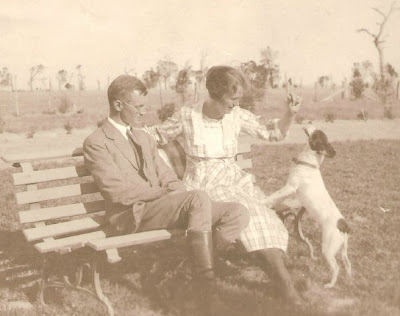 William Arthur Borthwick (1894–1953) was the fourth son and sixth child of William Borthwick and Ada Maud Mary, the eldest of the eight daughters of Edward Connor Bell and Katherine Anne Wallen.

William senior, my great-grandfather, migrated from Scotland in 1869, aged 19, after his father, Alexander Hay Borthwick, refused to buy him a commission in the Indian Army, in which two of his uncles had served with some distinction.
He may have been prompted to go to Australia by the fact that his father’s brother, Uncle John James Malcolm Borthwick, preceded him, and created in about 1850 the Tarong station atop the Blackbutt Range in the South Burnett region of southern Queensland, approximately sixty miles due west of Caloundra, and was one of the first men to ship wool from Brisbane.
On reaching he joined the National Bank of Australasia Limited, and became the youngest man ever appointed manager of a branch, in this case at Maffra. Thence he was eventually transferred to , where the family settled permanently.

My grandfather’s eldest brother, the namesake of their grandfather, Alexander Hay Borthwick, or Uncle Lex, as he was known, served in the A. I.F., lost an arm in Palestine, married Eva Sage of Mildura (a nurse whom he met whilst recuperating), and settled on the land not far from Cowarr in East Gippsland.

The second brother, 1st Lieutenant Keith Borthwick of the 8th (Victorian) Regiment of the 3rd Light Horse Brigade, fell on August 7, 1915, in the first wave in the famous Battle of the Nek at Gallipoli, one of the most famous but costly moments in Australian history. Because he was an officer, the name of Lt. Keith Borthwick, and his occupation (grazier), appear in one of the most haunting footnotes of Bean’s official history. The hundreds of ordinary diggers who died were, of course, not listed.

The third brother, John Malcolm, had much earlier chosen to pursue a career as a professional officer in the British Army, but evidently committed suicide at , aged 20.
He had two younger sisters, Aunt Jean and Aunt Kath (Kathleen), a talented viola player in what Uncle John used to describe mischievously as “Ziggy Zelman’s Follies,” but which was, in fact, the budding Melbourne Symphony Orchestra, whose first concert took place on December 11, 1906, under the baton of Maestro Alberto Zelman.
Neither Aunt Kath nor Aunt Jean (q.v.) ever married. As a dedicated volunteer, Aunt Jean transcribed by hand entire books in Braille. She and Aunt Kath lived together, first with their mother, known affectionately as “Da,” in Adelaide Street, Armadale, and then in a modest ground floor flat in Myamyn Street, a few doors down from Granny.

My grandfather, William, came after Aunt Kath, and, finally, the baby brother, Ronald Murray Borthwick, who also served in the A. I.F., and eventually married Aunt Meryl, the daughter of Dr. Hagenauer of .
On November 10, 1953, at the Veterinary School grounds at Parkville, Uncle Ron demonstrated a revolutionary stock cradle, which was thought to have considerable influence in the treatment and control of foot rot.

According to an engaging memoir she wrote in the early 1970s, Granny knew the Borthwick family when they were all growing up together in and around . She recalled Aunt Kath coming as Red Riding Hood to a big fancy-dress dance in the drawing room at Kilmany, and, later, in 1912, Granny’s coming out year, going to dances in Melbourne and golfing tournaments in Traralgon with Lex and Keith Borthwick.

The war was as costly for the Borthwick family as it was for scores of others. My grandfather volunteered for active duty, but was prevented from serving due to a heart condition brought on by having contracted rheumatic fever as a child.
In the end he lost two brothers, who, if they had survived might conceivably have been more suitable husbands for my grandmother, such is the vague sense one gets from a close reading of the relevant portion of Granny’s memoir, which was written long after William died of a heart attack at Berwick in 1953.

Posted by Angus Trumble at 3:35 AM