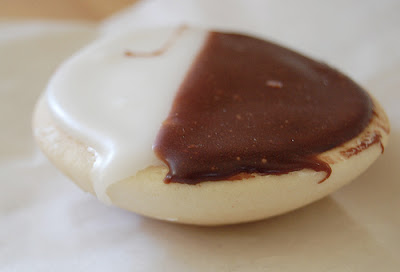 The neenish tart is an indigenous, commercially manufactured Australian delicacy consisting of a small pastry cup with, first, a dollop of raspberry or strawberry jam; a filling of sweet cream, mock cream, or occasionally custard, and sealed on top with two kinds of icing in equal halves, one of which is generally chocolate, the other usually pale pink or white.

The neenish tart was apparently invented by Mrs. Ruby Neenish in Grong Grong, near Narrandera in the Riverina district of southern New South Wales, when in 1913 she ran out of cocoa.

The earliest printed recipe for a neenish tart occurs in Miss Lucy Drake’s expedient Home Cookery, which was first published in 1929.

The catalogue of the otherwise impeccable National Library of Australia in Canberra does not yet contain a dedicated subject reference to “neenish tart,” a strange omission.

Satisfactorily, however, the subject heading “tart” does yield The Life of Quong Tart, or, How a Foreigner Succeeded in a British Community, compiled and edited by Margaret, Mrs. Quong Tart, which was published semi-privately in Sydney in 1911 by W. M. Maclardy.

Posted by Angus Trumble at 2:25 AM