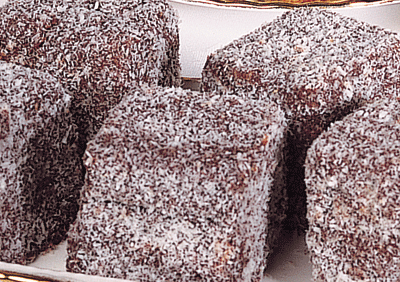 The lamington is a small, cube-shaped sponge or butter cake, covered in thin chocolate, and dusted with dessicated coconut. It is sometimes prepared with a layer of cream and/or strawberry jam between two halves of cake, but this elaboration is not canonical, and, along with other dangerous excesses, seems likely to have originated in .

According to the Australian National Dictionary, the earliest reference to the lamington occurs in a cookery book published privately in 1909 for the Ladies’ Working Guild at Holy Trinity Church of England in Port Melbourne. The recipe specifies “‘icing’ for [a ‘Lamington cake’]: ¼ lb. butter and 1 cup icing sugar, beaten to a cream; 2 tablespoons of cocoa, mixed with 2 tablespoons boiling water.” This is then “put over” the lamington.

The Port Melbourne lamington was obviously a whole cake, not divided into orthodox cubes, and curiously there is no mention of dessicated coconut. However, The Schauer Cookery Book provides a nearly identical recipe and, fortunately, concludes: “spread, when cold, with chocolate icing, and sprinkle with coconut” (Brisbane: Edwards, Dunlop, 1909).

By 1912, in the second edition of their Kookaburra Cookery Book, the Lady Victoria Buxton Girls’ Club in clearly envisioned individual cakes ingeniously sculpted into cubes: “when [the cake] is cold, cut into squares [sic] and ice.”

The lamington is said to have been named after Charles Wallace Alexander Napier Cochrane-Baillie, second Baron Lamington, G.C.M.G., G.C.I.E. (1860–1940), who was Governor of Queensland from 1895 to 1901, but there is some confusion on this point, because the etymology (accepted without question by Larousse Gastronomique) was almost certainly concocted post hoc by John Hepworth as recently as 1977, when his garrulous article on the topic appeared in Nation Review.

In his The Australian Language (Sydney: Currawong Press, 1978), Sidney J. Baker mentioned that a lamington was actually a Homburg hat, as worn by Lord Lamington. Elsewhere Baker mentioned the lamington, i.e. the cake, but conspicuously failed to connect it with the distinguished Old Etonian and sometime political secretary to Lord Salisbury. It may be that the name of the lamington was suggested by the close resemblance between the texture of the cake and that of Lord Lamington’s trademark Homburg, which was raffishly furry.

Though inadequately documented, this vice-regal connection, mediated by headgear, seems far more plausible than the bizarre theory, first mooted in the Bulletin in 1981, according to which the lamington was “named after the man who broke the world record for running from carrying a dog.”

The lamington is traditionally served for afternoon tea, and, together with the dazzling chicken sandwiches once served in the Regency Room at George and George, i.e. Georges (R.I.P.), constitutes an enduring legacy of Edwardian taste. The correct dimensions of the lamington, these days so often vulgarly exceeded, are 2 ½ in.³

Unlike the Georges’ chicken sandwiches, the lamington has become a not particularly endangered portion of the national estate. Friday, July 21, 2006, was designated National Lamington Day, and, more recently, the National Trust of Queensland listed the lamington as an “icon.”

In common with the pavlova, however, there is some evidence to suggest that the cake, if not the name, originated in .