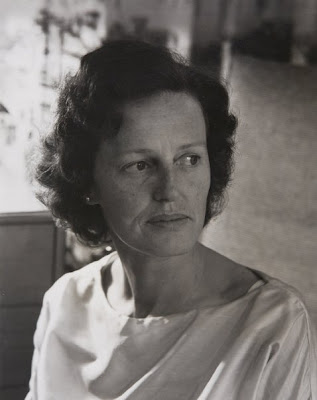 Anne was educated at the of ’ Grammar School (The Hermitage) in , and served in the Women’s Royal Australian Naval Service during World War II, stationed on , off the coast of .

There she learned and practiced modern naval semaphore.

After the war she got engaged to a man called John Kenny but, shortly before my parents got married in 1949, he broke the engagement for reasons that are not entirely clear. Certainly he remained a bachelor for the rest of his life. Anne was evidently heart-broken.

She qualified as a physiotherapist, and practiced that art, latterly in the pretty small hospitals at Orbost and Bairnsdale, until shortly before she died of cancer in 1986. In common with the rest of her family, she had the gift of close, enduring friendships, particularly with old navy friends such as “Nipper” Strahan, Heather Wallace, and professional colleagues, mostly strong women.

In the early 1960s, my father was responsible for introducing Anne to the late Henry Hodges Hall, a divorced attorney and, somewhat inexplicably, a connoisseur of jazz, especially the late Louis Armstrong.

In due course Anne and Henry got married, and settled in , , where Henry’s not especially thriving legal practice, Hodges Hall & Co., was located.

At Metung, when I was a little boy, Anne volunteered to teach me how to swim. Those lessons took place in the weedy, shallow water in front of the old boat shed, using an inflatable black rubber cylinder for flotation.

Later, I used to go regularly to to stay with Anne and Henry, usually when Mum and Dad were traveling abroad. Anne had the knack of making those visits wholly thrilling; she was an aunt in a million.

We gradually worked our way through all of Kay Thompson’s Eloise books, with their marvelous illustrations by Hilary Knight, who, incredibly, is still going strong. We borrowed each and all from the Geelong City Library, and my favorite was Eloise in Moscow.

No doubt this predilection for the exciting K.G.B. and related espionage subplots of Eloise in Moscow was genetically encoded, or else “encultured,” as we say in America, because many years later I found out that upon leaving university my cousin and godmother Janet Borthwick, of whom Mum and Anne were hugely fond, had been a junior officer in the Australian Security Intelligence Organisation, in effect a minor branch office of the C.I.A.

In about 1970, Janet was killed in a car accident on a stretch of highway near the farm where she settled not far from Albany in Western Australia. Luckily her infant son, Robert Campbell, survived the crash, grew up, became an engineer, and settled in New Zealand, where I gather he is prospering.

I was devastated when Anne discovered that in their wisdom, and without prior authorization, Eloise in Moscow had been de-accessioned, a disgraceful lapse in judgment on the part of the Geelong City Librarian or, more probably, that of a woefully ignorant junior, or quite possibly even sub-professional member of staff.

Perhaps sensing that the manly sports were an avenue down which it was probably safest not to escort me, Anne did her best to elevate my basic childhood knitting skills instead.

Actually, we got quite a lot further with origami, and created together an entire crèche, according to complex instructions obtained from .

After Henry sold his law practice in , he and Anne moved to the pretty small house they built at Metung, next door to Balmadies, and extended it.

Some years later, having experimented with a small but very beautiful farmlet on hills overlooking the right bank of the Tambo River, some miles upstream from Bairnsdale, Anne and Henry moved to a larger sheep property at Lindenow, on the Princes’ Highway, fifteen minutes’ drive west of Bairnsdale.

Uncle Henry, a wearer of cravats who subsisted on steak, whisky, and Mars bars, seemed to think of himself as a pastoralist, the steward of a vast and productive tract of East Gippsland, and not a retired country solicitor with an expensive hobby much subsidized by Anne, whose outlook tended to be far more realistic than his.

In any case, there is no question: Yallart, as Henry named it, was definitely smallish, and did not perhaps justify the construction of the enormously over-equipped shearing shed in which he took particular pride. Such was the forthright opinion of his far more experienced farming brother-in-law, Anne’s elder brother Uncle David, never a man to mince words.

Having Anne close by made our summer holidays at Metung the more enjoyable, though poor Nick was forced to join the crew of Henry’s absurdly complicated diamond-class yacht, Barega, in ever more uncomfortable, aggressively contested, and, above all, interminable races organized by the Metung Yacht Club. Henry was an exacting and, at times, intolerant skipper, along the lines of Lieutenant-Commander Philip Francis Queeg.

When I was about fourteen, I (but not Anne) tired of attempting to solve The Times crossword puzzle, so, at her supremely generous suggestion, and without the aid of computer technology, we simply created our own cryptic crosswords, with enormously devious and attenuated clues. These aroused some interest in the local community, and were eventually published in the Metung Pelican. As far as I am aware nobody ever managed to solve them, not even Mrs. Mayhew, the editor.

Anne’s superb strength of character is perhaps best illustrated by the following historical memorandum which she copied out and sent to me in Rome, knowing that she only had a very few weeks to live. The covering note was melancholy. Part of it read:

Dear Angus,
I had terrific plans about how I’d have a letter waiting for you when you arrived—well, you know what happened to THAT. Nothing. It is, regretfully, the story of my life. Great ideas, on a scale of 1 to 10, 10; execution: 0. Oh well...The sheep have just been crutched, and it’s a pleasure to look out at them pottering about with their nice clean faces and bottoms...

Although death was evidently much on her mind, Anne’s indefatigable sense of the ridiculous (and an amply justifiable sense of dynastic pride) shone through the enclosure:

“Rec. of Just. 18th May 1588: Alison Pearson in Byre-Hills, Fifeshire, was convicted of practicing sorcery and of invoking the devil. She confessed that she had associated with the Queen of Elfland for many years, and that she had friends in the Court of Elfland who were of her own bood [sic]. She said that William Simpson, late the King’s Smith, was in the eighth year of his age carried off by an Egyptian to Egypt, where he remained twelve years, and that this Egyptian was a giant; that the devil appeared to her in the form of this William Simpson, who was a great scholar and a doctor of medicine, who cured her diseases; that he appeared to her accompanied with many men and women who made merry with bagpipes, good cheer, and wine; and the good neighbors (witches—not mentioned by name for fear of “provoking their resentment”) attended and prepared their charms in pans over the fire; that the herbs of which they composed their charms were gathered before sunrise, and that with these they cured the Bishop of St. Andrews of a fever and Flux. She underwent all the legal forms customary in cases of witchcraft, i.e. she was convicted, condemned, strangled, and burned.” I don’t know what ‘Rec. of Just.’ is, but it apparently appears in an account of criminal trials in from 1536–1784, printed by A. Napier, [43, Trongate], in 1812. Edited by Hugo Ainsh, or Anish, or something.

In fact it is “Hugo Arnot, Esq., Advocate,” and the full title is A Collection and Abridgement of Celebrated Criminal Trials in , from A.D. 1536 to 1784, with Historical and Critical Remarks. Inevitably, like everything else, it’s here at Yale. Actually, there are two copies, both in that vast Alladin’s Cave, the Beinecke Rare Book and Manuscript Library. She concluded, and these are the last words my beautiful aunt ever communicated to me before she died:

I’m glad they strangled her first. I wonder what poor old Willie Simpson brought [from Egypt?]. And what was the Bishop complaining about if it cured his Flux, for heaven’s sake?

To which I think the only suitable answer is contained in the incomparably beautiful words of the old Aaronic blessing: