First Love On Both Sides 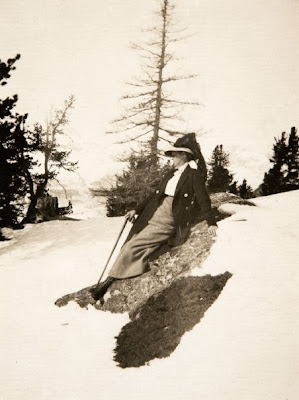 Among my grandmother’s papers was the following letter she received shortly after the death of her own mother, Sophie Pearson (above), photographed here in about 1913 at Pontresina in Switzerland:

Your letter, received tonight, gave me a painful shock.

Your mother and I were drawn together very much when she was in first. It was necessary that we should part, because in the state of our finances and prospects marriage was impossible.

I wanted her to know that mine was no passing fancy, but that my admiration for her had remained with me all the years, for there was little enough explanation when we parted. I felt she would like to know it, and so I sent her the book and the letter.

Will you please destroy the letter, and keep the book? People who read the letter might think there was more passed between us than was right, which was not the case.

Only it was first love on both sides.

I have had no letter, I am sorry to say, and never will get one now.

I should like to know, if it is possible, how long it was before she had her fatal illness that she received the book, and the letter. The postmark might tell.

Many thanks to you for writing.

Sophie, my great-grandmother, her seven siblings, and their mother, Emily Gooch, first sailed from Australia to England in the early to mid-1880s. The return voyage was evidently paid for by Sophie’s aunt, Mrs. Henry Hughes (Mrs. Gooch’s sister Sophia, rhymes with briar), who lived comfortably in London. My great-great-grandfather, George Cornelius Gooch, a grazier in the Flinders Ranges of South Australia, stayed behind.

Almost as soon as Sophie returned to Melbourne—surviving terrific storms en route, in the midst of which her mother gave birth to another, eighth sibling, Florence; her numerous little brothers were set to work pumping bilge water, and a dour Scottish clergyman made an irritating habit of regularly saying, “goodnight and goodbye, Mrs. Gooch, as I fear we will never see another morn”—Sophie’s aunt wrote from London, asking her to sail back again, this time unaccompanied.

In a handwritten memoir, my grandmother recalled that, on that second visit, her mother Sophie “had a wonderful time ‘growing up’ with balls, riding in the Park, staying in country houses, etc.”

Sophie met Arthur, and they fell in love.

All this must have been well before 1887, because instead, on July 2 of that year, Sophie married my great-grandfather, William Pearson, and settled soon afterwards at Bonegilla in the Riverina, on the Victorian side of the Murray River, about six miles northeast of Wodonga.

Long after William Pearsons sold it and took up his father’s Kilmany Park in East Gippsland, that large cattle station was turned into the Bonegilla Migrant Reception and , which was for many postwar immigrants their first Australian home, as indeed, under radically different circumstances, it was for my grandmother and her siblings fifty years earlier.

Arthur William FitzRoy Somerset, of Castle Goring, , who died in 1937, was a grandson of the Rev. Lord William Somerset, himself the sixth son of the fifth Duke of Beaufort (1744–1803).

Notwithstanding Arthur’s gloomy assessment of their prospects, perhaps slightly overstated in his letter to Granny, or else offered by way of tactful explanation—the not particularly effective salve for a guilty conscience maybe?—it seems possible that Arthur Somerset and Sophie Gooch may also have encountered the at times sharp prejudice in Victorian against marriage to young ladies who were born and raised in the Australasian colonies. We shall never know.

Forty years later, Arthur may have been prompted to send his tribute by learning that Sophie had become a wealthy widow. One senses that Arthur was hurt that, although she certainly received it, Sophie never acknowledged the gesture before she died.

A no-nonsense, “water under the bridge” outlook is powerfully evident in the Gooch X chromosome, much fortified by the cultural environment of East Gippsland. Or perhaps in retirement at Metung Sophie knew she was dying. Either way, it fell to Granny to write to Mr. Somerset and let him know.

Afterwards, Granny must have complied with Mr. Somerset’s request to destroy his original letter, which is a pity, but my elder brother Hamish still owns the book. It is a sumptuously illuminated, hand-tooled, de-luxe edition of Malory’s Le Morte d’Arthur.

Posted by Angus Trumble at 3:25 PM