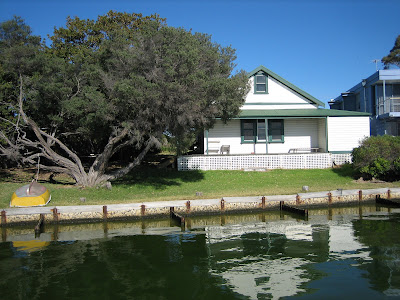 Mum and her siblings spent many idyllic summer holidays in Balmadies, Granny’s house at Metung, on the shore of Bancroft Bay.
It was there in about 1947, attending to what was even then a slightly anachronistic ritual, when Dad timidly asked to speak privately with his future father-in-law, intending formally to request Mum’s hand in marriage.
He must have tackled this simple task rather badly. Perhaps Dad was nervous, or even prolix—in any event obscure—because, without hesitation, my grandfather escorted him down the back passage, out past the kitchen and through the laundry, along the garden path, all the way back to the outside loo. It seems Grandfather Borthwick formed the impression that Dad was simply asking for directions.
The old house at Metung was and is a wonderful place, and the Borthwick children and their hordes of school friends spent many summer evenings after dinner playing games, of which “Up-Jenkyns!” was perhaps the most exciting.

The rules of Up-Jenkyns! are fairly straightforward.
Two teams of players sit on opposite sides of a table. Team A passes a sixpence from person to person under the table, so that Team B does not know who is concealing it.
The aim of the game is for Team A to keep the sixpence hidden, and for Team B to locate or dislodge it by issuing commands such as “Up-Jenkyns!,” commands which require Team A to adopt standard but tricky hand positions and gestures.
When Team B calls “Up-Jenkyns!,” the tightly clenched fists of the players on Team A must be at once placed in full view on the table.
The first player on Team B then carefully scans the fists for any sign of sixpence possession, and also the faces of his opponents to detect any hint, any flicker of self-consciousness, or some other clue as to the location of the sixpence.
Having made the best possible assessment, the first player reaches over and touches the hand in which he hopes the sixpence will be, saying, “Tip It.” The hand is then opened.
If the guess is correct the sixpence passes to Team B, and play recommences. If wrong, Team A repeats the process, hides it again, and the second player on Team B tries to discover its whereabouts. Strategies of bluffing and deception are liberally employed by Team A in an effort to mislead Team B, whilst various types of call are deployed as confusingly as possible by Team B, in an effort to flush out the sixpence. Systems of scoring vary from family to family.
According to The Weekend Book, as authoritative a source as I have been able to locate,

Orders can only be legally obeyed when given by one of the Captains; and if the team which is hiding the Sixpence obeys any other order, it loses. The “In” team, which is hiding the coin, must put up its hands the instant the opposing Captain calls “Up-Jenkyns!” but he ought to allow them at least five seconds before he calls. He can keep their hands in the air as long as he likes, for examination purposes; the “Down” calls are “Down-Jenkyns” (hands can be put down as players please); “Smashums!” (hands must be crashed down on the table): “Crawlers!” (hands placed quietly on the table, and fingers quietly undone till the hands lie flat): “Open Windows” (hands must lie on the table with all the fingers but not the thumbs apart); and “Lobster-Pots” (finger-tips only to rest on the table, and fingers to be held at an angle to the palm). In lifting the hands only the Captain’s order must be obeyed; but he should allow free and fair consultation to his own side first. Scores can be played for, by the number of separate “wins,” or the show of hands on the table when the sixpence is discovered. Before the game starts, all rings and spurs to be removed. After the game, let the provider of the sixpence see that he gets it back!

Up-Jenkyns! was popular enough by the 1920s to put in an appearance in The Sittaford Mystery (1931) by Agatha Christie, but some years ago a correspondent to the Guardian suggested that Up-Jenkyns! was played much earlier by young naval officers around the wardroom table using a small object or token representing the ear of Captain Robert Jenkins (d. 1741).
Captain Jenkins was in 1731 master of the merchant brig Rebecca, bound for Jamaica, when according to the Oxford Dictionary of National Biography, he was “boarded on 9 April by a Spanish coastguard off Havana. Jenkins was half-strangled and beaten by the Spanish, who wished to get him to reveal suspected hidden contraband. After failing to discover anything, the Spanish commander cut off part of Jenkins’s ear, ‘bidding him to carry it to his Master, King George’.”
The Jenkins affair contributed much to public enthusiasm for war with Spain, which broke out eight years later for different but related reasons. It was nevertheless known as The War of Jenkins’ Ear.

Meanwhile, I doubt if Up-Jenkyns! is in any way related to jenkinsite, which the Oxford English Dictionary, citing the American Journal of Science, series II, Vol. XIII, 1852, defines as “a variety of hydrophite, found as a fibrous incrustation on iron ore.”

If indeed Up-Jenkyns! was a happy by-product of The War of Jenkins’ Ear, I cannot account for the corrupt spelling. Perhaps one of my readers may know, or care to comment.
Posted by Angus Trumble at 10:49 AM