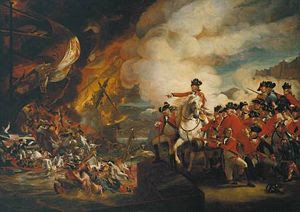 Aunt Jean was a self-styled repository of dynastic knowledge, some of it bizarre, most of it true, all of it fascinating.

“Our immediate Borthwick ancestor,” she wrote gleefully—not the meat Borthwicks (no relation), but the other sort—“fought a duel with one Pringle, over land or a woman, and killed his man. His property was seized, and he was outlawed and fled the country. When he thought the affair forgotten, he returned and became a Border sheep farmer. His descendants followed either that calling or joined the Indian Army.

“Two [Lieutenant-Colonel William Borthwick, and his son, naturally also William] were both present at the Great Siege of Gibraltar [1782–83]. One General Borthwick [that same son] was wounded at Cuidad Rodrigo.”

Here he is, I like to think, presumably among the unidentified supernumeraries in John Singleton Copley’s epic rendition of ’s famous action against the French in Salamanca during the Peninsular War.

Whether or not we see him here in action, it was certainly true that Major-General William Borthwick was present at Cuidad Rodrigo, though it was temporarily overlooked at the time.

According to Hansard, (House of Commons, April 8, 1812, vol. 22, cap. 239), “The Chancellor of the Exchequer [Spencer Percival, who was in fact Prime Minister, speaking here less than a month before he was assassinated in the lobby of the House of Commons] said, that since the Vote of Thanks had been passed…to the officers and men who assisted at the capture of Ciudad Rodrigo, he had learned that the names of Major-General Henry Frederick Campbell, Major-General the Hon. Charles William Stewart, Major-General Lord Low, Major-General James Kemmis, Major-General William Borthwick, and Colonel William Maundy Harvey, brigadier-general in the Portuguese service, were omitted in the said motion; he therefore moved the like thanks to them; which was agreed to.”

Building a head of steam, Aunt Jean resumed: “Another Borthwick helped to put down Thuggery in . (The Thugs, from father to son, were a sect who traveled about, fraternizing with people, then throttling them by night with a yellow scarf.) He was rewarded by a Rajah of the district with the gift of an emerald ring valued at £1,000, and returned to , where he built a very nice home.”

This, too, was essentially true.

According to Major-General Sir William Sleeman, K.C.B., having caught wind of a party of thuggee at Dekhola, Captain William Borthwick—Borthwicks generally came only as William—“despatched a party of horsemen to apprehend them. The horsemen came upon the gangs unawares, while encamped outside a village, and accused them of stealing opium; they were glad to have an opportunity of clearing themselves of this unfounded accusation, so accompanied the horsemen to the village for the purpose of being examined; immediately on their arrival they were secured and taken to Captain Borthwick, of whom seventy-nine were made prisoners, viz:—five made approvers [i.e. who confessed, and provided legally useful accusations against others], 74 tried by Colonel Stewart, Resident of Hyderabad, 39 condemned to death, 21 to imprisonment for life, 11 to limited imprisonment and 3 acquitted. These captures struck terror into the hearts of the whole fraternity of Thugs.”

I shudder to think what Aunt Jean would have made of the fashionable post-colonial view that the very concept of thuggee was simply a British invention, a cynical means to tighten their hold over the subcontinent. Certainly it has been given credence in , (where else?), and the of America.

Yet while there is a small grain of truth rattling around somewhere near the bottom of that theory, in fact the thuggee organized crime cult of ritualized theft and murder with a garotte was a real, pressing, and widespread problem, above all for the indigenous populations of colonial India, and no doubt brave Colonel Borthwick took as much pride in their suppression as Aunt Jean did, and, come to think of it, I do also.

Aunt Jean was equally interested in her mother’s family, not only the creole matriline (q.v.), but the Bells and Pethericks.

Her maternal grandfather was Edward Connor Bell. His father was a Scot, and practised for many years as a Writer to the Signet in . This Mr. Bell married a girl called Mary Petherick, and they therefore qualify for two berths in my exclusive club of thirty-two, thankfully unrelated great-great-great grandparents.

The Pethericks had for several generations been solicitors in . According to Aunt Jean, they were “a very musical and artistic family,” were proud of their strong cavalier credentials, and, perhaps because of this, sheltered a French countess during the Terror.

In 1925, when Aunt Jean visited her Petherick relations in they still owned an expensive chatelaine that the countess sent them after she returned to .

Aunt Jean reported that in 1913 or shortly before, the Pethericks’ private chapel was burned down by the suffragettes. Either she was wrong, or it was an inside job, because satisfactorily the Misses Petherick, probably the daughters of John Petherick, solicitor, of 6, St. Leonard’s Street, Exeter, were in 1909 still registered members of the National Union of Women’s Suffrage Societies.

One of old Mrs. Bell’s Petherick sisters was an artist and printmaker. Another married the famous alpinist Albert Frederick Mummery. Though “very small and fragile-looking,” when she was not playing the piano, or accompanying their brothers on the harp, violin, and cello, Mrs. Mummery was climbing the with her husband.

According to Aunt Jean, Mr. Mummery was lost on , but this is certainly not true. Instead on August 24, 1895, he perished in an avalanche with two Ghurkas, Ragobir Singh and Goman Singh, whilst reconnoitering the Rakhiot face of Nanga Parbat in the , which is even better. Their bodies were never recovered. In a not particularly unusual instance of table-rapping and spiritualist preoccupation in the 1920s, the Pethericks were somehow led to believe that the remains of Mr. Mummery would reappear exactly one hundred years hence. Much encouraged by her intimate friend, the eccentric Australian novelist Mary Grant Bruce, Aunt Jean noted this intriguing prediction for posterity, but I have checked and Mr. Mummery is still missing.

Even more respectable than the Pethericks of Exeter were Aunt Jean’s Wallen relations, the sisters of Francis Robertson Wallen (another member of the club of thirty-two). These Misses Wallen lived with a niece in a house on the walls of Londonderry in , and were said to be constant attendants at the Cathedral.

This is bound to be true, because there was, is, and never will be any reason why you would even wish to make it up.

The same goes for the fact the Misses Wallen were intimate friends of Cecil Frances Alexander, who wrote “All Things Bright And Beautiful,” “There Is A Green Hill Far Away,” and other Victorian chart-busters.

According to Aunt Jean, “The Quality lived on the Walls in those days.”

Although their forebears developed the amusing knack of marrying into the of , the Misses Wallen resolutely remained spinster ladies and, writing in the front room at Flat 2, , Armadale, Aunt Jean noted with barely disguised contempt that, in a curious twist, that niece eloped with the Cathedral organist, and, recklessly, “went out to .”

Posted by Angus Trumble at 5:16 AM