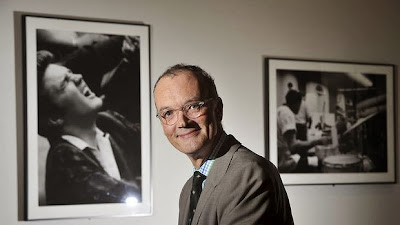 In the second week of February I shall take up the position of director of the National Portrait Gallery of Australia in Canberra, having spent nearly eleven supremely enjoyable years living in the United States and serving as curator then senior curator of paintings and sculpture at the Yale Center for British Art here in New Haven, Connecticut. There is a great deal to be done between now and then, and, of course, in the years ahead I doubt I shall have enough time to maintain this modest bloggy train of thought—such as it has been. By exchanging the old curatorial hat for the novel director’s, I shall in future speak more directly for my institution and less often for myself, so you, my readers, may wish from time to time to visit http://portrait.gov.au to see what we are up to. Looking back over the past five years I am astonished to discover that I have dispensed several millions of words in this little spot—and I can thoroughly recommend it as a discipline, and as a form of recreation. One is occasionally astonished by the wide reach of this medium, by its capacity to reignite old friendships, and to create new ones. For all of this I am very grateful, and to all of you I say not goodbye but au revoir—and, of course, Happy New Year!
Posted by Angus Trumble at 3:02 PM 2 comments: 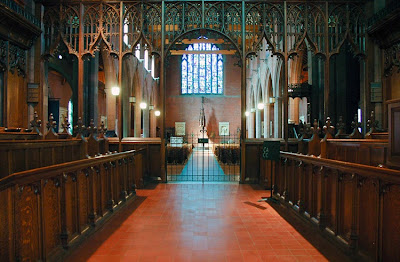 Among the numerous bronze and brass commemorative wall plaques in Christ Church, New Haven, my favourite reads: “ELEVEN / STATIONS OF THE CROSS / WERE PLACED IN THIS CHURCH / BY THE MUNIFICENCE OF / GRACE M. FOGG / IN MEMORY OF HER FATHER / EZRA D. FOGG / AND HERSELF.” I have never felt compelled learn more about the munificent Miss Fogg, I suppose because so much is hinted at in the inscription. The stations themselves are impressively large, and carved in fine-grained sandstone, possibly Portland. Miss Fogg paid for all but three. Which three? Did she have some objection to certain of them on scriptural grounds (or lack of these—although several more than three stations of the cross are absent from the Gospels), or was this simply a question of firmness in the face of an unfortunate budgetary overrun? The specificity of “eleven,” and not ten or twelve or some other tally is so very intriguing, and I cannot imagine it may be attributed to a pedantic executor. One senses that these are the words of Miss Fogg herself. She was certainly not given to false modesty; the stations commemorate not only her late father but herself too, hardly an afterthought. The desire to be remembered after we are gone is natural and widespread, but few people take steps to erect a church monument for that express purpose. I imagine Miss Fogg was a doughty New Englander who did not hesitate to call a spade a spade. She was evidently an only child. Perhaps in later years she concluded that nobody would do her the honors if Miss Fogg did not see to it herself. I see that Ezra D. Fogg was in 1899 president and treasurer of The Ezra D. Fogg Company at 87 Church Street, New Haven, wholesale lumber merchants (“SPECIALTY—Pine and Spruce Boxes and Shooks, and Brick Pallets”). Shooks are lengths of wood sufficient for one hogshead or barrel, prepared for use and bound up in a portable packet, a sort of kit. At this date Mr. Fogg resided at 389 Edgewood Avenue in Westville, not too far from me. I imagine Miss Fogg stayed there until she died, interesting herself up to a point in the affairs of the parish—and perhaps inadvertently terrorizing successive curates and churchwardens.

Posted by Angus Trumble at 11:01 AM No comments: 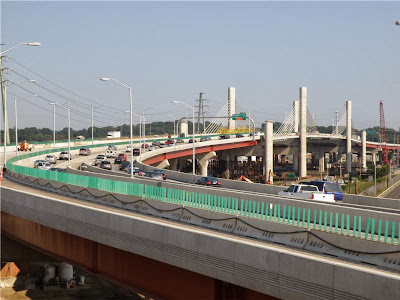 North American motorists are among the worst I have ever encountered—over nearly 30 years driving on both sides of the road in many countries spread across four continents as well as on numerous islands. I am not sure why this is so. Perhaps Americans learn to drive far too early—often at the age of fifteen or sixteen—and are held to a breathtakingly low standard, mostly using vehicles with automatic transmission. Many people freely admit that they could not possibly operate a “stick-shift,” or manual. Parallel parking is an almost complete mystery to them, for it is not part of the test. All you have to do in Connecticut is to steer your nose through 90 degrees into a vacant spot in a parking lot, and finish up somewhere between the two solid white lines. By contrast in downtown New Haven one often witnesses the comic spectacle of people making five, six attempts to parallel park, such that the end result is not parking so much as abandonment—four or five impressionistically unaligned feet from the curb, sometimes more, having for several minutes prior swooped, bumped, and zig-zagged, earnestly and longingly, in the hope of attaining eventual success. In heavily built-up urban environments they wander aimlessly between lanes, much encouraged by the extra space provided by one-way streets with three or more wide lanes, divided by lines mostly ancient but occasionally still visible. They hesitate, or suddenly change their mind in the middle of busy intersections. They ignore pedestrian crossings completely and often run red lights, as if these were merely advisory. They turn left from the right without indicating, tracing a wobbling arc that delivers them in the end to an inside lane at right angles, often against oncoming traffic, which is frequently ignored on the assumption that those of us with the right of way will intuitively, even gladly yield by braking sharply. On the interstate highway system, meanwhile, people steer their creaking old bedpans, many the epitome of un-roadworthiness—hubcaps and bodywork scraped, dented, battered, or missing; lights often broken or defunct—at 70 miles per hour and upwards when the speed limit is 55—aggressively tailgating, passing on the wrong side (a much cherished and particularly dangerous habit here in Connecticut), safe in the knowledge that they will almost certainly not be ticketed by any state troopers attempting to impose order. Motorists treat huge lorries as if they are as maneuverable and responsive as a Corvette. You see many yelling illegally into their mobile phones, and sometimes even texting at the wheel. Motorcyclists are free from any obligation to wear helmets. These lethal habits know no distinction as to race, age, or gender; they are universal. And every Saturday morning on National Public Radio a succession of callers to Car Talk (a program that runs of out of Boston), seek guidance about some 1983 Corolla that has clocked up 280,000 miles and is emitting smoke, or making an alarming noise, or conking out suddenly and inexplicably on the open road. The roads themselves, meanwhile, are pockmarked, bumpy, and shored up with dribbling lines of bitumen and stray gravel, or else clobbered and patched up in so ad hoc a manner that you wonder how the entire system can survive the punishment of another winter. The contrast between all this and the wilderness of late-model Mercedes Benzes, BMWs, and Renaults one encounters nowadays in the eastern suburbs of Sydney and Melbourne, or the velvety smoothness of our freeways, could not be more stark, and provides an apt metaphor for the sluggishness and malaise in which the United States’ economy is in many sectors and many regions still immured—despite reassuring but mostly misleading noises from Washington and Wall Street. It is equally if not more worrying that many people think, in the face of all possible reason, that American drivers are, on the whole, pretty good, and that American streets, roads, and highways are as safe as can be!
Posted by Angus Trumble at 10:17 AM No comments:

Too early to say 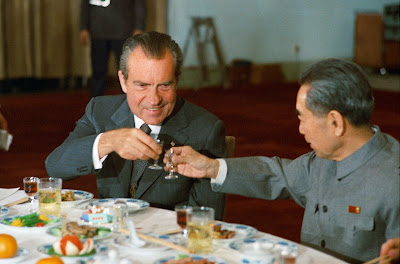 A journalist asked Premier Chou En-lai (Zhou Enlai) what, in his opinion, had been the full impact of the French Revolution? Chou’s answer, after a long and thoughtful pause, was: “It is too early to say.” A good one, no? Perhaps too good. Obviously this anecdote gained traction in the wake of Vietnam, and ever since, as a measure of the sage Chinese “long view,” but because it is repeated so regularly, and with a suspicious array of variations—occasionally also attributed to Ho Chi Minh, and even to Mao—I have become increasingly skeptical about its authenticity. There is a whiff of orientalist fantasy, after all, to say nothing of plain condescension in the broad historical conceit. Add to these a suggestion of facetiousness on Chou’s part and the whole thing strikes a false note. No doubt it held some appeal, too, for student radicals in the west to whom Chou was most appealing in the guise of Confucius, and not so much as master of the Party Congress. At last I think I have cracked it. According to Charles W. Freeman, Jr., a retired American diplomat who acted as the official interpreter for President Richard M. Nixon during his famous visit to China in February 1972, Chou made his remark to Nixon over lunch or dinner in Peking (as it was then still known), during a rather delicate political discussion about revolutions that had succeeded, and ones that had failed. These included the Hungarian uprising of 1956 and the Prague Spring of 1968. According to Freeman it was quite clear from the context that in saying it was “too early to say” Chou was referring specifically to the upheaval that took place in Paris in May 1968, and not to 1789. There are other theories, for example that Chou made his remark to a French journalist at the Geneva conference in 1954, but I suppose this simply demonstrates the tendency of enjoyable snippets to take on a life of their own, and powerfully to resist clarification, correction, or debunking. I think we can safely predict that Chou will continue indefinitely to say “it is too early to say,” without any fear of contradiction.
Posted by Angus Trumble at 9:53 AM 1 comment: