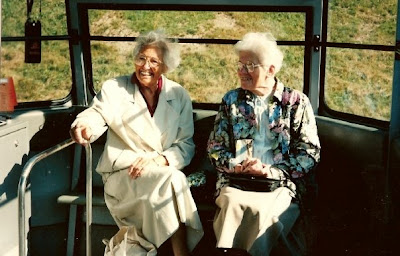 Some weeks ago I visited my friend Leideke Galema, a Dutch nun (left) who lives in comfortable retirement on the outskirts of Arnhem in the eastern Netherlands. I first knew Miss Galema years ago when, living in the belfry of the church of S. Agnese in Agone on the Piazza Navona in Rome, she and her co-religious Miss Josefa Koet (right) hired me as a general dog’s body, telephone answerer, plant-waterer, and errand-runner. It was heaven.

Miss Koet died not long ago, but Miss Galema is thriving. She met me at the little railway halt, in the middle of open fields, and we walked in the drizzle through the village to her charming villa. It was once used as a boarding school for the children of Rhine barge captains; the river is less than a kilometer away.

Right across the road is the convent where Leideke boarded during the war. She was sent there after the English teacher at her previous school in The Hague made off with the best friend of his own daughter, a classmate of Leideke’s. ‘We were only fifteen,’ she says, with a look.

Following the terrible Battle of Arnhem in September 1944, her present home was co-opted by the British army as a temporary palais de justice. The local Nazis were rounded up, and thrown in the cellar. Leideke tells me this with relish, as if there are a few of them still down there.

I went to Amsterdam as a courier, escorting to the Van Gogh Museum our very large painting of the celebrated Dutch-Cherokee lion tamer of Boston and Hartlepool Mr. Isaac van Amburgh, by Sir Edwin Landseer.

In the freight warehouse at Schiphol, the crate and I were temporarily stored in a secure spot near the diplomatic pouches. India’s are dark green, rather smart; the United Arab Emirates and France had mountains of them, but I looked in vain for ours.
While we were waiting for the forklift man, an otherwise innocuous-looking stack of twenty or so little wooden boxes was loaded into the back of a heavily guarded van, rather more strenuously than seemed necessary. What is shaped like a box of tissues, weighs a ton, and clinks dully? When the vehicle visibly sank down on its haunches, I realized we were looking at a shipment of gold bullion.

There is only one thing more spine-chilling than the air temperature after a Canadian blizzard, and that is standing outside the Hôtel de Ville in Montréal, looking at the St. Lawrence River: mighty, choppy, slate grey, and lethally fast-flowing. Thank goodness I am standing beside Florent the farmer, a human windbreak.
It seems incredible that the original settlers decided to stay on after the first winter (1642/43). Driven by necessity, and by an amusing mental picture of burly French-speaking Hudson’s Bay fur trappers paddling past moose, Iroquois and redcoats, I head straight to the firm of Henri & Henri, fourrières, in the rue Sainte-Cathérine est, and buy myself a slinky beaver hat. In this weather, fake fur does not cut the mustard.

Florent tells me my beaver looks ridiculous, and no doubt people in warmer climes will want to throw paint at it, but these are not moments for hesitation: I must have furry ear-flaps, and I must have them now.

Which reminds me, not long ago I examined a new acquisition in our rare books department, the 1914 illustrated trade catalogue of Winsor & Newton Ltd., Manufacturing Artists’ Colourmen. I was immediately intrigued by the off-printed testimonials glued opposite the relevant product, one of which is a pungent relic of empire.
On October 29, 1911, only a month before setting off for the South Pole by sledge, Dr. Edward A. Wilson, the universally liked “Uncle Bill” of Scott’s doomed five-man polar party on the British Antarctic Expedition, wrote from the Terra Nova at Cape Evans in McMurdo Sound, reporting that Winsor & Newton watercolours and papers had demonstrated remarkable stability in the extreme cold. Although the letter is here reproduced in facsimile, I wonder if it has ever found its way into the Scott literature.

You will no doubt be interested to know that whilst on a sketching tour in Gippsland (Victoria) two years ago, I had a large surplus of your Flake White on my palette at the completion of a day’s work, and, with the aid of my palette knife, applied it to the surface of a fallen tree, which was minus its bark. Last month I paid another visit to the locality and have had an opportunity of comparing the paint with some fresh from the tube, and find it has not discoloured in the slightest. This proof of permanency is of importance in itself, but when I add that the paint has been fully exposed to Australia’s summer sun for two years, and the tree lies on marshy land, and had for several days of each winter been submerged by the overflow of the River Latrobe [sic], these facts are worthy of record and speak well for the purity and permanency of your Flake White.

Québecois say some very strange things in their version of French. A senior colleague of mine remembers a man behind the counter in a Montréal bookshop apologizing for keeping her waiting because, he explained, he was ‘sur le téléphone’ – a phrase impossible to formulate unless you had thought of it first in English. Sure enough, I hear it too in a café called Schwartz’s, where I exchange occasional monosyllables with Florent the farmer, and then again shopping for CD oddities in the enormous music store called Archimbault.

Carriages on the Montréal Métro have rubber tyres as in Paris, while the names of stations are fantastically mixed: Champ-de-Mars, Peel, Verdun, Namur, Pie IX, Square Victoria, Côtes-des-Neiges.

The portrait of the Queen on the new money is surprisingly good.

The memorial to Lord Nelson is a statue on a column. It went up in 1808, carries a long inscription in English, and was paid for by public subscription. Everywhere there are similarly post-imperial vibrations.

A melancholy moment in the biting tundra of the car park at Pierre Trudeau International Airport; a long embrace—rocking gently back and forth, crunching the snow—and then goodbye to Florent the farmer, with his beautiful arms, arctic ear-muffs, and the Toyota pick-up he’s driving home to Trois Pistoles, Québec.
Posted by Angus Trumble at 12:34 PM