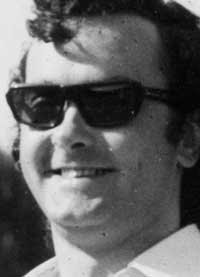 I first met Ian in 1981, after a lecture at the National Gallery of Victoria in , and became his student in 1983. In , he introduced me to Contessa Luciana Valentini, who was at that time the librarian of the at , and smoothed an easy path towards obtaining my tessera for the Vatican Library, at that time no easy feat.

His comments on essays extended sometimes to many paragraphs, in his flawlessly elegant hand, and while, at times, astringent, and occasionally cross, you always felt that he paid you the compliment of taking your work as seriously as it deserved to be.

Ian presided over riotous end-of-year parties for his students, and liked over lunch to set out his unique personal philosophy, which he described as “Catholic agnosticism.”

He was proud of his French heritage, his acquaintanceship with the “contessa madre,” and towards the end of his life was an inveterate maker of late-night telephone calls.

The following is an excellent obituary by Charles Zika and Ian Britain, “Vale Ian Robertson,” UniNews, Vol. 13, No. 2, February 23-March 8, 2004, augmented with material printed in the order of service for Ian’s requiem mass, which took place in the chapel of Newman College, University of Melbourne, January 13, 2004:

Ian Robertson taught generations of history students at the and, on the wider international scene, was known as a scholar of Renaissance Rome.

He was born in Brighton (), educated at (a prize pupil of the celebrated critic and English master A. A. Phillips) and graduated with first class honors in History at the .

In 1958 a scholarship took him aboard the Strathnaver to , , where under the mentorship of distinguished historian John Hale he took out a B.Phil. – often regarded in those days as superior to a doctorate.

Ian commenced the first of his sustained stints in as a “British Scholar at ” in 1959. He recalled being guided around the city in his early days by Sir Anthony Blunt, the famous scholar, connoisseur, and spy for the Russians.

Appointed in 1961 to a lectureship in his old department, Ian returned to , which was his institutional base for the rest of his life.

He was promoted to a senior lectureship in 1966, and from 1982 to 1984 served as chairman of the department, ever judicious and consultative in the public controversies which embroiled the department at that time.

Periods of study leave drew him back to , particularly to the Bibliotheca Apostolica Vaticana where much of his research was conducted.

His work on the administration of the papacy and the papal states in the fifteenth century culminated in his book on Pope Paul II and , Tyranny under the Mantle of St. Peter, which, though much delayed, was eventually published in 2002.

It was as a teacher that Ian acquired his widest reputation and exercised his greatest influence. His lectures were legendary for their clarity, depth, and sweep. His tutorials could be intimidating, but if you stayed the course they proved deeply inspiring.

Ian was instrumental in establishing a vibrant culture of research, especially among those he guided toward postgraduate studies. It was in large part his energies, generosity, passion, and judgment, that paved the way for the field of Italian Renaissance studies becoming one of the most renowned areas of research by Australians in the international arena.

Ian took early retirement at the end of 1997, disillusioned by the impact on universities of the Dawkins reforms. He continued as a fellow of the department, a generous yet exacting supervisor, mentor, and friend to many.

As well as the Italian language, Ian mastered the skills of the cucina, and loved to entertain his friends in and .

He had no surviving family members in , but was surrounded by friends and former colleagues during his last illness in ’s Hospital, where he died on Tuesday, January 6, 2004, the Feast of the Epiphany.

Posted by Angus Trumble at 8:34 PM