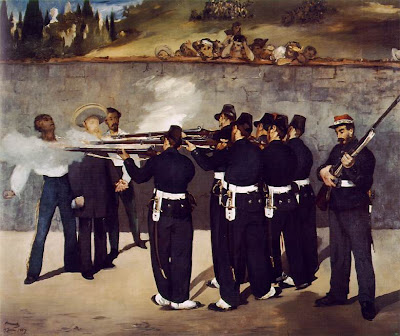 A curious historical footnote to the grim story of the execution by firing squad of the Emperor Maximilian of Mexico, immortalized by Édouard Manet, is afforded by a rare photograph taken by François Aubert, probably in 1865, which is today in the collection of the Musée Royal de l’Armée in Brussels: 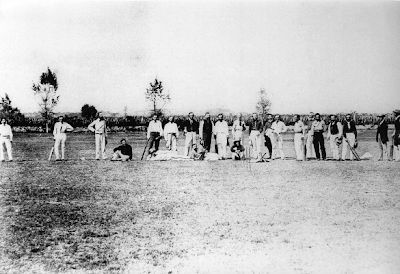 It shows Maximilian posing in white trousers beside the wicket with both teams of eleven, and umpire, and a drinks waiter, at the regular Sunday match of the M.C.C., i.e. the Mexico City Cricket Club. In the 1860s, two teams were normally fielded during the regular season between October and March, the reds and the blues. Maximilian was definitely playing for one of them, maybe against the British ambassador.

The spacious ground, by all accounts as dry and hard as granite, bordered by a dense “hedge” of cactuses, may have been on land belonging to the Scottish merchant Thomas Jamieson at Napoles in the Tacubaya district, just outside the capital.

Visiting in 1865–66, the English traveler W. H. Bullock reported that the mostly British members of the club, which still exists, “never allowed political events to interfere with their game and that more than once, they had continued with a match, even ‘in view of fighting going on in the hills around them.’”

This remarkable story is told most recently by Michael P. Costeloe in his fascinating article “To Bowl a Mexican Maiden Over: Cricket in Mexico, 1827–1900” in the Bulletin of Latin American Research (Vol. 26, No. 1, January 2007), and it underlines the cheerful unreality, if not utter hopelessness, of Maximilian’s brief reign over the Mexico of Benito Juárez.