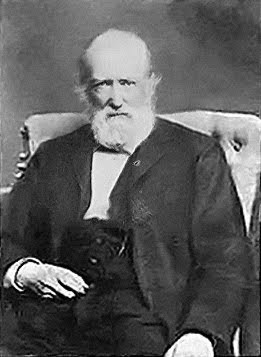 Earlier this week a learned friend and colleague of mine asked me if I was familiar with the fiction of Theodor Storm, the nineteenth-century German lawyer, man of letters, and committed advocate of the removal of his native Schleswig-Holstein from Danish hegemony.

Although this name rang a distant bell, in due course I had to be reminded of his light-hearted way with titles, such as Im Nachbarhause Links (In the Neighbor’s House on the Left), that capricious novello of 1875 which has been described as “a study of the eccentric and miserly Frau Jansen, with flashbacks to her childhood and early youth, revealing that the old lady was always a repulsive miser.”

This natural comic flair was already evident in Waldwinkel: “Richard, saddened by years as a political prisoner for his liberal views and by the unfaithfulness of his wife, lives withdrawn from the world. He has taken Waldwinkel, a remote house in the woods, to pursue his botanical studies. Chancing to visit an old friend, a judge, when the latter is presiding over the case of a man who is eventually convicted of indecent behavior in respect of his [the man’s] beautiful ward Franziska, Richard is so struck with the victim that he engages her to help his old housekeeper, and to make sketches of his botanical specimens. He falls in love with Franziska and feels able, with her at his side, to face the world again and take up a chair in botany. However, just before the day fixed for their wedding, Franziska elopes with a young forester.”

If you liked Waldwinkel, you’ll love Wenn die Äpfel reif sind (When the Apples Are Ripe), “a humorous tale of a lovers’ moonlit rendezvous, interrupted by a boy stealing apples.”

One detects a strain of slapstick in Der Herr Etatsrat (The Dyke Administrator): “Sternow is a clever dyke administrator, but completely amoral. He wastes his evenings drinking with callow students and bellowing lewd songs, always attended by his factotum Käfer. The Etatsrat’s two children are utterly neglected. The son, Archimedes, is a good mathematician but kept at home to help his father, and, when Sternow at last relents and sends him off to university, it is too late: Archimedes works, but also drinks excessively, undermines his health, and dies of a fever. Phia, the daughter, leads an utterly solitary life. The scheming Käfer takes advantage of this lonely girl, and in due course she dies shirtly after giving birth to a stillborn child.”

True, German humor does require some perseverance. Fortunately, we may gain certain insights from a useful compendium sifted and arranged in 1903 by Mrs. Minna Sophie Marie Baumann Downes. It is entitled German Wit and Humor (Philadelphia: George W. Jacobs and Co.), and the following teaser (p. 7) will demonstrate its immense value:

A man passing through a forest saw an old blind bear. A young bear, whose tail was in the old bear’s mouth, led him. The man took his gun and shot the bear’s tail off. Then he took hold of it, and led the blind bear for two miles to market at Stuttgart.

I am told that this one still elicits loud guffaws from Saarland to Brandenburg, and from Lower Saxony to Bavaria.

Posted by Angus Trumble at 7:48 AM