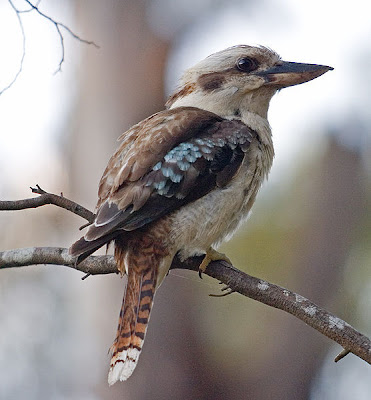 There is a slightly odd piece in the current issue of the New Yorker in which David Sedaris describes an intimate encounter not so long ago with a tame kookaburra over lunch in Daylesford, Victoria. Reading this I was immediately transported to the weatherboard house at Metung, where, in the very early morning, perched high in the branches of the enormous ghost gum that overhangs the boat-shed, a pair of extremely competitive kookaburras occasionally woke us up with a loud impromptu performance. I’ve always thought “laughter” a poor analogy for the distinctive cry of that muscular bird the kookaburra—except for those scarily over-emphatic, tooth-baring, rapid-fire, ack-ack-style baboon-screeches occasionally uttered by seasoned cocktail party-goers slightly too shrill in their grimly determined sociability. In fact it wasn’t only the kookaburras that unleashed a noisy dawn chorus. Between their limited engagements I recall waking up in the morning to the far more mellifluous song of the pied currawongs, the butcherbirds, the Australian magpies, the bellbirds, the aptly named whipbirds, the honeyeaters, the scratchy-sounding wattlebirds, the noisy miners, the fairy martins, maybe even the subtle mopokes (known more properly, I gather, as the southern boobook, or Ninox novaseelandiae), and very occasionally a rather perplexed and disoriented-looking king-parrot, or else a sulphur-crested cockatoo. Meanwhile, gazing out across the back lake, where we fed kitchen scraps to the seagulls, I always found it hard to take my eyes off the pelicans, those majestic, stately, yet grunting survivors of some antediluvian epoch, or else to keep track of the lissome cormorants after they dived energetically for fish. From time to time, against the evening sky, high above the line of scrubby dunes that separate Bass Strait from the lakes, you could spot a lone sea eagle wheeling hungrily. I have no idea what they sound like.

Posted by Angus Trumble at 1:46 PM