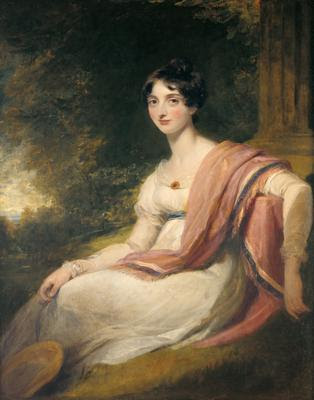 In his Island to Empire: 300 Years of British Art, 1550–1850, Ron Radford cleared up the problem of the identity of Caroline Matilda Sotheron, the subject of Sir Thomas Lawrence’s beautiful three-quarter length seated portrait in Adelaide, formerly in the Bowmore collection (above). In the process he also made a satisfactory revision of the date of execution, backwards from ca. 1825 to a more plausible ca. 1808, and, incidentally, made entirely redundant my own catalogue entry for the painting in Christopher Menz’s 1998 exhibition Regency: British Art and Design, 1800–1830.
However, a chance discovery now adds a further note of color, and indeed mystery, to the early history of the portrait. Hitherto, the work has been traced to a Duveen Brothers’ sale conducted in New York on the evening of Thursday, April 29, 1915 (lot 12). In the following day’s New York Times (Friday, April 30, 1915, p. 13), under the breathless headlines “PAINTING BY CUYP SOLD FOR $73,000; Top Price of Fifteen Damaged Masterpieces Given for a Dutch Landscape. A LAWRENCE FOR $31,000…” we find the following remarkable report:

Probably one of the shortest picture sales on record and the smallest number of pictures for which the ballroom of a great hotel was taken for a sales-room was the sale of fifteen masterpieces of painting belonging to the Duveen Brothers by the American Art Association at the Plaza Hotel last evening.

These were the pictures which were on the steamship Mississippi in November, 1914, when, a fire breaking out, they were more or less damaged. The paintings were sold as they were, without attempt at restoration, and the returns for the fifteen were $190,125. The highest price of the evening was $73,000 given by Scott & Fowles for Albert Cuyp’s “Herdsmen, Cattle, and Shepherds in a Landscape.”…

The picture by the Dutch master shows a beautiful summer morning, a road by a stream, and a little color, read and blue, is introduced in the figures on the road. It is a picture which was said by [Cornelius Hofstede] de Groot to be one of the best by the artist on the Continent. It came from the collections of Edmund Higginson [1802–1871] of Saltemarsh [sic] Castle, 1842; Joseph Bond, 1872, who lent it to the Academy; C[harles]. [John] Wertheimer [1842–1911], who lent it to the Academy, and Comte Boni de Castellane [1867–1932] and M. Maurice Kann, Paris. Mr. [Thomas Ellis] Kirby said in putting up the picture that it was valued at $200,000. It was started at $3,000, ran up immediately to $10,000, was the subject of considerable competition, other dealers trying for it, and it was finally knocked down to the purchasers.

There was apparently little damage done this picture by the fire. Others of the pictures painted on panels had the wood badly warped, and in some places cracked where the colors were little affected. Only two pictures of the lot were very materially defaced.

The two beautiful portraits by Sir Thomas Lawrence and Sir Joshua Reynolds brought nearly the same price. The “Portrait of Miss Sotheran [sic],” by Lawrence, was nearly full length, a charming young woman, simply dressed in a creamy white gown, blue sash, and salmon-colored shawl. It went to Scott & Fowles for $31,000. W. E. Evarts paid $30,000 for Reynolds’s “Mrs. Otway and Child,” a woman seated, wearing a white gown and quilted coat, with a yellow bow as a headdress. She holds the hand of the child, who stands upon a sofa [Mannings, No. 1371]. Sir Anthony Van Dyck’s “Portrait of Alexander Treist, Baron d’Auweghem,” a standing figure in black velvet, with wide, thick ruff and one hand resting on the pommel of his sword, went to Seaman, agent, for $8,700. [This painting is now convincingly re-attributed to Gaspar de Crayer (1584–1669), Cambridge, Mass.: Harvard Art Museum/Fogg Museum, Gift of Mrs. Samuel Sachs, Mrs. W. Scott Fitz, Mrs. Ernest B. Dane, Felix M. Warburg, and three anonymous subscribers, 1915.13.]

Rubens’s, “The Holy Family,” was the last picture sold and went to C. F. Williamson of Paris, for $20,000. This was from the collection of the [fourth] Duke of Sutherland. It is 63 by 39 inches, composed of six life-size figures, the Virgin with the Child at her breast, a cherub at her feet, at the left St. Catherine holding the little St. John with St. Joseph on the right bending over the group [Getty Research Institute, Los Angeles: Duveen Brothers Records, 1876–1981, Acc. No. 960015, Series II.A., Part 5, Box 286, Folder 4].

Leaving aside the remarkable disparity of prices paid (clearly, and dazzlingly in Lawrence’s favor), this sale is fascinating because it so exactly reflects the competing, even incongruous elements of Gilded Age taste in New York, much fortified by Duveen Brothers, Knoedler’s, and P. & D. Colnaghi before the Great War: in other words Italian Renaissance panels jostling with Rubens and Van Dyck; seventeenth-century Dutch landscape, and eighteenth-century English grand-manner portraits. An earlier article in the New York Times (Sunday, March 28, 1915, p. 12, “MARRED PAINTINGS OF MASTERS IN SALE…”) made it clear that this capsule of paintings was consigned as cargo aboard the Mississippi by Duveen Brothers in London the previous November (1914), and damaged in the hold of the vessel.
The 4,738-ton S.S. Mississippi was built for the Atlantic Transport Line by Harland and Wolff in Glasgow, and was the first ship to sail the transatlantic route that was equipped solely with internal combustion diesel engines. She was launched on February 11, 1914, and ultimately sold for scrap in 1933. In 1902 the A.T.L. was subsumed, through a merger with five other lines, into J. Pierpont Morgan’s huge, parent International Mercantile Marine Company, and with them became synonymous with the opulent First Class services between New York, Boston, and British ports. Apart from these reports, however, there appears to be no other mention in the press of any fire aboard the Mississippi. It must have been comparatively minor.
Nor indeed do we know how the New York dealers Scott & Fowles ultimately disposed of the Adelaide Lawrence, if in other words they found a local buyer; it seems at least possible, because the United States did not enter the War until April 1917, and money was still plentiful in New York, despite the economic malaise of 1913–14. Certainly the painting was back with Duveens’ in 1923.
In 1980 an elderly former employee of Scott & Fowles donated several hundreds of files from the company to the Cincinnati Art Museum, who, in turn, donated them to the Archives of American Art at the Smithsonian Institution in Washington, D.C. It is just possible that that 2.2 linear feet of documents may contain some reference to the present picture. However, I think I shall leave this matter for Adelaide to pursue.
Posted by Angus Trumble at 9:56 AM