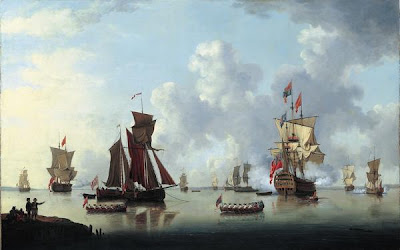 In the course of a rich and busy life there are coincidences that, upon measured reflection, aren’t really all that coincidental, such as coming face to face with someone you know on a busy street in the middle of an enormous foreign city—I think of the two separate occasions when I ran into David Jaffe, first near the Campo dei Fiori in Rome some time in 1986, and then again in New York City in 1995 (on Madison at 77th Street; we were both attempting to dodge the enormous cavalcade of Pope John Paul II). Not too surprising if you really think about it, because our shared interests inevitably attract us to the same kind of places. However, what happened yesterday is harder to account for. At a morning meeting with numerous colleagues around a large conference room table here at the British Art Center, a London-based scholar—whom I do not know very well—spread out at random quite a lot of his own photographs of examples of distinguished eighteenth-century English picture frames, and after a moment I realized to my astonishment that the photograph nearest to the spot where I was sitting was of a picture that I knew, and knew well. Our guest had photographed this particular painting on the wall at the Art Gallery of South Australia in Adelaide some years ago, long before we ever met, but I first saw the picture in wholly, even radically different surroundings in 2001—namely the modest home near Mount Barker, deep in the Adelaide Hills, of a ship’s captain and his wife, who soon afterwards donated it to the Gallery in memory of his parents. It is a fine, large maritime painting, as befits its provenance, signed and dated by Francis Swaine (1765), and carries the evocative title The Landing of the Sailor Prince at Spithead. At the time I guessed that the elegant, openwork frame was rather special, and in all probability “original,” meaning that the finished canvas had probably never been housed differently. But what caused my bosom to swell with pride yesterday was that our visitor, who evidently knows what he is talking about, included that Swaine among a handful of the most distinguished English frames that he has yet had the opportunity to photograph. If the photo had shuffled further up the conference-room table I might not have noticed it at all. Objects and images swim around us with ever accelerating speed, and in daunting numbers, so I cannot conceive of the odds against such a chance encounter taking place—unless, of course, our visitor choreographed it for my benefit. I very much doubt if he did.

Posted by Angus Trumble at 6:42 AM