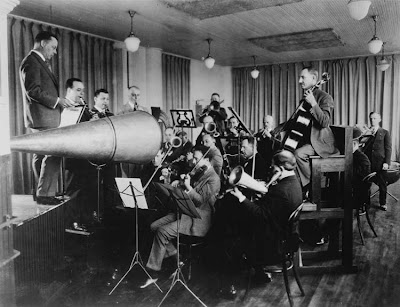 Assisted by the vastly learned Richard Warren, I have been systematically working through the extraordinarily rich collection of rare early sound recordings in the collection of the Sterling Memorial Library here at Yale, gradually assembling a representative program to offer through headphones to visitors to our forthcoming Edwardian Opulence exhibition. I wish the relevant laws of copyright would allow us to make this program more widely accessible on CD, possibly even include it in the catalogue, but outside the university I am afraid this will be prohibitively expensive, and administratively unachievable thanks to the relevant provisions of the Sonny Bono Copyright Term Extension Act 1998 (U.S. Public Law 105–298). Nevertheless, it has been a fascinating task, not least because of those moments of genuine surprise when an occasional tic or habit of British speech or pronunciation stands out as completely different not merely from “received pronunciation,” as it is now known, but from any other even vaguely recognizable variant. I do not speak of those relatively familiar locutions that were discernable at least until fairly recently in the voice of H.M. The Queen, e.g. gawn awf for “gone off,” crawss for “cross,” lawst for “lost,” Awstralia for “Australia,” or sawft for “soft,” though these are plentiful and charming. When Somerset Maugham said petrol he laid exactly equal, seesaw emphasis on both syllables, of which the second was pronounced exactly like “doll”—with an especially short, clipped “o.” E. M. Forster, meanwhile, said articulayte for “articulate” (the adjective); motionliss, useliss, chickin, and Athins (Greece), for “motionless, useless, chicken, and Athens,” as well as sincewity, weeweeniss, mystewiousniss, and murmewing—though naturally these were caused by a slight speech impediment. He also enunciated very carefully the “p” at the beginning of “psychology.” Describing an Ethiopian dignitary at the coronation of King George V and Queen Mary in Westminster Abbey in 1911, Vita Sackville-West later recalled watching this person with “rurl fescinairtion,” more particularly his “high yepple green hyet” with a “lahrn’s mane wined a-rind it” because, she said, every time he turned his head, the lion’s mane tickled “the neauze of his next-daw nebba.” And in a broadcast recorded in 1935, Max Beerbohm makes the perplexing aside: “Mayfair and Westminster and St. James’s were grand, of course, very urban, in a proudly unostentatious way...They were places of leisure—of leesure, one might almost have said, in the old-fashioned way.” Old-fashioned? Presumably he meant late Victorian, or even earlier. And in the scratchy old phonograph recordings Nellie Melba made for the Gramophone and Typewriter Company in the comfort of her drawing-room in Cumberland Terrace (ca. 1904), you can clearly hear the voice of the sound engineer from behind a screen give the diva her cue by shouting “Go!” when the clunky recording apparatus was successfully set in slightly arduous motion. Incidentally, the purpose of the screen was to enclose the equipment, and keep the wax of the cylinder well heated and comparatively soft, to avoid creating a harsh whistle in the track. Some engineers were evidently better at doing this than others. At any rate, the knack here is to demonstrate what, if any difference the extraordinary proliferation of sound recording (and motion pictures, for that matter) made to the visual culture of Edwardian Britain, and why we should care. However, I am working on it.
Posted by Angus Trumble at 1:46 PM