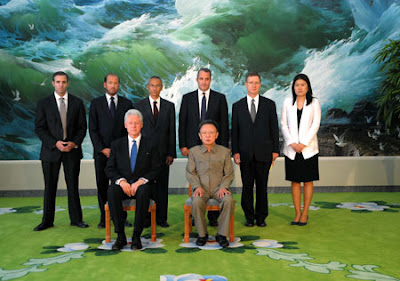 As far as I can tell nobody who witnessed President Bill Clinton’s coup de théâtre in Pyongyang last week has yet remarked upon that bizarre mural. Dear Leader seems to like it, because I recall having from time to time seen other unfortunate visitors lined up to be photographed in front of the same one. Combined with the appalling carpet—scrolling sprays of peony on a field of lime green; you really couldn’t make it up—and those creepy net curtains discreetly drawn over the windows of other sparsely furnished rooms (presumably to hide or at least soften the view), that mural certainly raises fascinating questions as to the larger purpose of totalitarian interior decorating. But who on earth painted it? Was the artist maybe recruited in Damascus and permitted to go home to the Assads after he finished the job, or was he set to work training an entire school of North Korean wave-bird-and-froth painters who await future deployment? Because quite clearly this is a work of some considerable technical accomplishment, even if the subject of estuarine breakers and a flock of undersized white sea birds viewed from a rocky bank or promontory (maybe) or some other high notionally downward-swooping, even airborne vantage point—at any rate vertiginous—creates just about the most disturbing visual effect that it is possible to achieve when converted into the floor-to-ceiling mural format. I wonder how this commission came about? Was it, perhaps, entrusted to Mrs. Kim, whoever she may be, or a terrified sub-committee of craven toadies? Perhaps the North Korean Communist Party observes a strict code of regulations in respect of decorating state facilities. Alternatively, was it bequeathed to the nation by Great Leader himself—who, as is not generally appreciated here in America, despite being dead, remains en poste as President of North Korea until the end of time? (Kim Jong-Il, his son, is merely Chairman of the National Defence Commission of North Korea, and General Secretary of the Workers’ Party. Incidentally, it is rumored that the current Kim’s favorite dish is donkey.) In the face of so many more worrying aspects of this wholly benighted regime I suppose these questions are trivial, but there must be somebody who knows the answers.

Posted by Angus Trumble at 8:28 AM