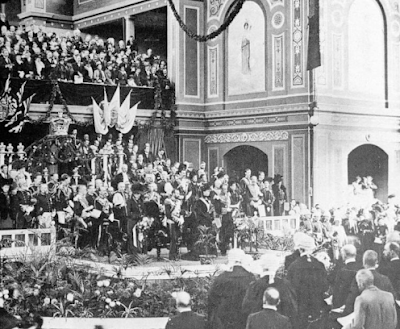 The Duke and Duchess of Cornwall and York, the future King George V and Queen Mary, visited Melbourne in May 1901, to represent King Edward VII at the opening of the first federal Parliament of the Commonwealth of Australia in the Royal Exhibition Building (above).

Still in court mourning for Queen Victoria, and not yet created Prince of Wales (a point which evidently created some tension between royal father and son), the Duke evidently jumped at the chance to escape after a week of back-to-back official engagements, and went to Sale overnight by special train for a day’s shooting at Kilmany Park. This was the apogee of my great-grandparents’ stewardship of Kilmany, although the day’s sport was the brain-child of the Anglo-Irish Chief Justice and Lieutenant-Governor Sir John Madden, who also laid on the hunting dogs.

This garrulous account of the visit, with its scarifyingly racist coda, appeared on the front page of the Gippsland Times, on Thursday, May 16, 1901:

HIS ROYAL HIGHNESS SHOOTS A SNAKE
On Tuesday last [May 14, 1901], shortly after 11 o’clock [p.m.], His Royal Highness the Duke of Cornwall and York left Prince’s-bridge station by special train for Sale, to engage in a day’s shooting at Kilmany Park, which had been arranged by His Excellency the Lieutenant-Governor of Victoria.
In addition to His Excellency, the following composed the party:— Captain His Serene Highness Prince Alexander of Teck, K.C.V.O. [the Duchess’s brother]; Lord Wenlock, G.C.I.E. [Lord of the Bedchamber to the Duke]; Commander Sir Charles Cust, Bart., R.N., M.V.O. [Equerry]; Hon. Derek Keppel, M.V.O. [Equerry]; Commander B. Godfrey Faussett, R.N., A.D.C.; Lieutenant the Duke of Roxburgh, M.V.O., A.D.C.; Lieutenant-Colonel Byron, extra A.D.C.; Captain Duff, A.D.C. to the Governor-General. Lord Hopetoun [the Governor-General] was prevented from accompanying the party owing to pressure of work [so what was Captain Duff doing there?].
The usual precautions were taken to assure the safety of the Duke on his journey. A pilot engine preceded the Royal train by a few minutes, and all along the railway from Melbourne to Sale were stationed special caretakers within speaking distance of each other to guard against any interference with the line. In addition all entrances to the railway lines were to be rigidly closed until a late hour last night [Wednesday, May 15].
The Royal train consisted of No. 1 and No. 2 State cars, the latter being the car recently specially built in Victoria for the Duke [and was still in service c. 1991]. In addition there were two D.V. vans, a boudoir car, and an inspection car, whilst, as may be imagined, excellent sleeping accommodation was provided. The railway officials were represented by the Acting Commissioner (Mr. Fitzpatrick), and the heads of the various branches of the service, whilst there were three guards and three conductors in charge of the train.
Sale was reached about 4 o’clock yesterday morning, when the massive engine alarmed some of the citizens by its deep sounding whistle, and later by the blowing off of steam.
It was not, however, until about nine o’clock yesterday morning that that the party made a move for the shooting ground. The first to move off was His Royal Highness, driven by the Hon. William Pearson, M.L.C., in Mr. J[ohn]. B[enward]. Pearson’s handsome four-wheel dog-cart with a pair of greys. [John Pearson was William’s younger brother, and his wife was Sophie Pearson’s sister Catherine. They lived at Kilmany Park and took care of it for the William Pearsons from 1912 to 1918.]
His Highness had travelled some distance before the next conveyance followed containing the detectives on duty. Detective Ward was in charge, and there were also present Detectives Cook (Tasmania), Roche (Sydney), Dungey (Melbourne), and Bosun (Railways). Detective Christie, who was especially appointed to shadow the Duke was also present on special duty [obviously]. Following the detectives the other members of the party came in straggling order, and it was well after 10 o’clock when the real business of the day was commenced in the top paddock at Kilmany Park, about a mile and a half further on than what is known as the racecourse paddock.

A splendid lot of shooting dogs were provided from the crack kennels of Sir John Madden, Mr. McKinnon, and other well known sportsmen, and the sport was all that could be desired. The party was divided into two, and the Duke opened in the top paddock by securing a double rise. Two dogs pointed at once in widely separate directions, and the man in charge of the dog on the left touched him and he put up his bird. The Duke allowed the bird plenty of law, in fact he did so all through the day’s shooting, took aim, and with his first barrel brought it down, and with his second securing the bird put up on his right at very long range. His Highness very soon gave evidence that his reputation as a shot earned on the shooting grounds at home was well deserved. He grassed his first five birds without a miss, and before he cried halt had secured nineteen brace. This was up till about 2 o’clock, the luncheon hour.

After lunch the parties changed paddocks, and then came an incident startling in its nature, yet one which brought special interest to the day. His Royal Highness was walking along with Mr. Pearson waiting sport when within a couple of yards of them he saw a copper snake, said [correctly] to be very poisonous. It was the work of an instant; the Duke raised his gun and soon put an end to the intruder. An attendant took the skin off the snake and it will no doubt be preserved as a memento of His Highness’s day’s sport in Gippsland.
Altogether during the day the party bagged 158 brace of quail. Towards the close of the day’s shooting His Royal Highness expressed a desire to have a shot at the parrots, and he was provided with parrot shooting to his heart’s content in the orchard [uncomfortably close to the house]. Other members of the party shot hares and other game during the day.

Before leaving the party were [unexpectedly] entertained at [a hurriedly prepared] afternoon tea at Kilmany House, Mrs. W. Pearson, assisted by her sister Mrs. Gellion [Aunt Nance Gooch], doing the honors. His Royal Highness whilst at the house planted an oak in the garden to commemorate his visit. [The oak is still there, and an acorn from it was planted outside Granny’s bedroom window at Metung. That tree is also alive and well.]
Just now the Kilmany Park cattle are looking at their best, and Gippsland stock got a good advertisement, for the Duke and party greatly admired the beasts they saw.
The Duke was delighted with his day’s sport, as may be judged when he decided to delay his stay an hour. He had had an excellent day’s shooting, and the outing had enabled him to work off a cold which he was afraid intended to stick to him through his tour.
It was expected that the Royal party would leave Sale at four o’clock, and at that hour there were a large gathering, principally of women and children, to get a look at the Duke. It was not, however, for the reason mentioned above, until just before five o’clock that the party arrived. They were driven along Foster-street and up Raymond-street to the railway station, amidst the welcoming chimes of St. Mary’s Cathedral bells, and His Highness’s arrival was the signal for loud cheers. It was not long before the whole party arrived, and the rain moved off amidst cheers for the Duke, and one for Sir John Madden.
The press had been specially asked to notify that the Royal visit was to be a purely private one, and to the credit of the Sale people be it said that desire was respected. True the railway station was gaily decked, and the engine which did duty for the trip, was beautifully decorated, whilst here and there in the town a flag was seen to be flying. But there was no attempt at a demonstration, and the Duke was at ease.
Orders were given that only members of the party should be admitted to Kilmany Park, and the detectives exercised a close supervision, though some pressmen managed to find the “Open Sesame” for the day, including that most pushing and capable of the press photographers, who represents the “Australasian.” Some civilians were excluded who it is said did not appreciate the attention paid to them, but a little thought will show them that the officials were in the right.
His Royal Highness, and in fact all the party, were attired in shooting costumes, showing but the variation in the old and new country methods. The Duke really looked much more at ease than he did at any time during the celebration week, whilst the Lieutenant-Governor looked far more complaisant than in his regimentals. The freedom of the shooting costumes must have [seemed] glorious from their point of view, though the crowd at Sale would have been better satisfied with the bright uniforms discarded for the day.
It may be mentioned here that we owe the Royal party’s visit to Sale to the good opinion formed of Gippsland as a shooting ground by Sir John Madden at a time when he had more leisure for the sport. Knowing that His Highness was fond of shooting he made the suggestion for a day’s sport to the Governor-General, and it being accepted as a good one Sir John sent to Mr. A. Clues, as a sportsman who knows the country, to select a site for the great day. After some inquiry it was decided to ask the Hon. William Pearson’s permission to use Kilmany Park. Mr. Pearson at once placed the Park at the disposal of the Royal party, and the arrangements yesterday were in the hands of the Lieutenant-Governor.
With the exception of Mrs. Lyon’s pair of greys from Somerton Park, used as a safe pair to drive His Royal Highness, all the drags and conveyances for the Royal party were supplied by Messrs. Clark Bros., and in a style that reflected credit not only on themselves, but on the resources of the district. The Duke during the day appeared well pleased with the horses and conveyances, and as a matter of fact had a turn in each of the drags driven by Driver Clark and Driver Ellis.
The Duke was afforded some amusement by a stuffed monkey bear [koala] which had been set up in one of the trees at Kilmany in a life-like attitude by Mr. Dugald Buchan. There was no attempt to deceive His Highness, but merely to give an idea of the native bear. As the party was looking on, a Laughing Jackass [kookaburra] sat gazing down in respectful silence, with no desire to show disloyalty by breaking out into a premier chuckle at the rather amusing scene.
There was an attempt made to show how the Aborigines lived in their native state by a camp on the route, and the Duke pulled up and gave the dusky ones a couple of shillings, but the display was hardly a representative one.
Posted by Angus Trumble at 1:22 PM