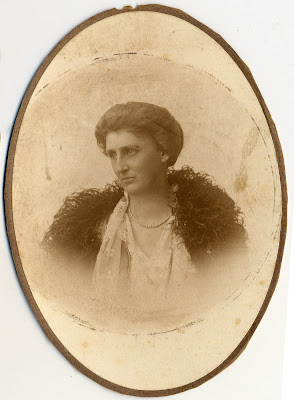 Our two maternal great-grandmothers, Sophie Pearson (above) and Ada Borthwick, were lifelong friends, long before our grandparents, Sophie’s daughter Helen and ’s fourth son William, got married in 1920.

When Sophie returned briefly to in the summer of 1915, she wrote to , prompted to do so by the anniversary of ’s son Malcolm, who left to take up a commission in the British Army. He died at of a fever contracted on board ship in the middle of 1908.

It is seven long years today since dear Malcolm left , yet tho’ so long ago everything is so clearly stamped on one’s memory. I still have his little book [of days], and love it. We were so dreadfully disappointed to miss Keith and Lex [Malcolm’s brothers] as we had been looking forward so much to seeing them. Ten days today since we came home, and we sometimes wonder if we have ever been away. One falls back so quickly into the old rut. Kilmany is looking beautiful and certainly Lilly and Alex [Gooch, her brother and sister-in-law] have not spared themselves. It is so lovely to be with them all again, and to see my dear old Father growing stronger again. Of course it is a great joy that Nance and Arthur [Gellion, her sister and brother-in-law] are in , and such a perfect little home. Kittie [Gooch], too, is coming to Copeford for three or four weeks so that will add to our delight.

Have you seen the Bobs? They are due in today, and I’m sure will get a great welcome.

We had a letter from Roy [Pearson] on Monday, dear son was in great spirits. I almost dread to hear any day now that he has gone to , yet of course know that it must come, and he would be sadly disappointed if he did not go. Oh! This awful war! I wonder when it will all be over.

Six months later Lieutenant Keith A. Borthwick was killed in action at Gallipoli, and over the remaining three and a half years of relentless industrialized slaughter, Aunt Mim’s first husband, Captain Pat Jackson, and Granny’s fiancé, Lieutenant Campbell Russell, R.N., were both also killed. Roy Pearson, Lex and Ronald Borthwick, to say nothing of all three of the Trumble brothers, including our grandfather, Tom Compson Trumble, the naval flying ace and future senior partner of Mallesons, were lucky to survive the war.

Posted by Angus Trumble at 4:10 PM