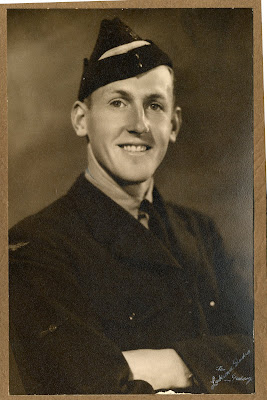 The following brief article was published after Uncle David was rescued from the North African desert, but presumably before the military censors authorized the publication of his name. Granny clipped and kept it, evidently with much pride and enormous relief. David was shot down by a Messerschmidt Me109 on November 9, 1942, and the family was immediately notified in Geelong that David was missing in action, presumed dead.

Among the episodes of bravery cited is that of a 21-year-old fighter pilot baldly referred to as “Sergeant X, an Australian.” Wounded by cannon shell in both legs, entangled in the oxygen tube when he started to bale out, and having scarcely time to pull the rip cord of his parachute before reaching the ground, he landed in the desert without water bottle or emergency rations, which had been torn from his equipment. After dressing his wounds with pieces of parachute, he found he could not stand up, and started to crawl across the desert. By using his left foot and both arms he was able to propel himself slowly. In this way he crawled for four days and nights. He sucked early morning dew from desert flowers to assuage thirst; sometimes, while he lay motionless, he caught large beetles, cutting off their heads and eating their bodies. When found in the shade of an old Arab tomb by a patrol he was still conscious, and able to thank his rescuers for his first drink for four days. He had lost four stone, and the palms of his hands had been worn to sores. One wonders why the identity of such heroes is cloaked under an algebraic symbol.

Posted by Angus Trumble at 9:56 AM