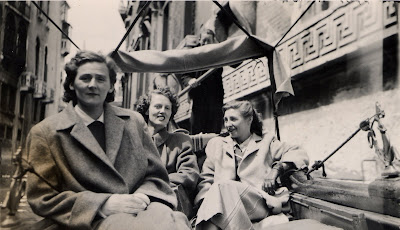 You don’t often get someone else’s glimpse of your childhood self, but into her notebook I find that dear Aunt Anne recorded the following vignettes on March 6, 1970, when I was five and a half years old. I suspect that certain aspects of my character were already firmly in place, although the cheerful taste for giving orders seems to have been beaten out of me at Melbourne Grammar. Perhaps that is a good thing.

It is now more than twenty-two years since Aunt Anne died, but I still miss her. She was the paragon of aunts. Here she is in about 1951 in Venice riding in a gondola with two WRANS chums, Cynthia Stirling and Liz Moran (they trained together at Port Melbourne). Anne is in the middle, looking radiantly beautiful. By the time I first remember her, more than twenty years after this photograph was taken, she was still very handsome.

Strangely, I have absolutely no recollection of “George,” and I suspect that he is some sort of conflation of dear Edward Glover, who lived around the corner in Church Street, and maybe other children as well.

Angus is just five. He has started “real” school this term.

“Do you know what?” This is just a series of noises he uses to gain one’s attention, a sort of placing of a foot in the conversational door. He never waits to hear whether or not one does know. “I saw Uncle Fester at school yesterday.”

My knowledge of the Charles Addams cartoons is limited, but I gathered they had been animated [sic] and promoted to The Telly.

“How extraordinary,” I said. “I wonder what he was doing there.”

“I don’t know,” said Angus, losing interest. “He was dressed up as one of the masters.”

Angus has his friend George to play. George is a shrimp-sized creature, wearing a plastic crash helmet. His slightly ovine little face is only saved from total oblivion by the large pale ears on which the helmet rests. He is a perfect guest. Offered a ride on the despised tricycle, he accepts with such enthusiasm and enjoyment that Angus feels obliged to take it back and try it himself. George has the scooter. They have solved the problem of conversation by both talking at once—not actually simultaneously, more like a Bach fugue, each theme weaving in and out of the other.

“We’re having roast beef for tea,” answers George, drifting after him.

“And I think it’s going to be ice cream for pudding,” counters George.

“We’ll have to be very careful, and not go on the road,” says Angus, never backward in showing leadership if that means giving orders. I think in a family of three much older brothers he doesn’t get much opportunity to order anyone around, and George is small enough and good-natured enough—or just plain self-centered enough—to permit it without argument, or not to notice.

“Or perhaps stewed apricots,” he continues, his eyes glazing at the thought, peering out from under the helmet like a mouse from its hole.

Peddling off down the footpath, Angus is still giving instructions.

“If anyone comes along, you have to pull right over to the fence and stop.”

“I think stewed apricots are the nicest thing in the world.”

When they returned they were still talking happily, and they moved inside to look over Angus’s toys. Confined by four walls, they suddenly multiplied. Four small feet couldn’t make that amount of noise. Self-conscious in the knowledge that they were overheard, their voices rose high and shrill, and the talk became correspondingly less elevated. They were reaching the point where mothers tend to lay about them on the grounds of “showing off” and “being silly.”

“Quieten down, or go outside,” says my sister with the authority of twenty years of son-raising behind her. It is years since I saw her surprised or irritated by anything a small boy can turn on. So it doesn’t surprise me now that their voices drop, and their feet are suddenly only two-apiece once more, and they work earnestly on the tired gray plasticine, working it into snakes and cakes; coiling the snakes to make mats, and making faces on the cakes with their fingernails.

Do children naturally decide what to do with plasticine, or do we teach them? Watching them I can feel again its slightly sticky cling under my palm as I rolled it out forty years ago, and remember the difficulty of getting the roll of even thickness. It tended to grow thicker under the arch of one’s palm, and taper at the sides. And as it grew longer under the rolling hand, one end would suddenly leap up like a real snake. Angus and George use the same method I used...

I get down on the floor and join in, the boys good-naturedly each giving me “a bit.” We sit there, rolling and pinching, minds drifting, but brought to sudden awareness as our fingers unconsciously figures for our pleasure and pride.

“Here’s a cup and saucer.” Otherwise there is only silence and the sound of our breathing.

George’s mother comes to collect him. The spell is broken. Grown-up shrillnesses now.

“Thank you so much for having him.”

Why don’t children tell parents not to show off? I suppose they think it’s just another injustice that parents can get away with “silly talk.”

I forgot to ask, but I do hope they had stewed apricots for tea.

Posted by Angus Trumble at 9:48 AM